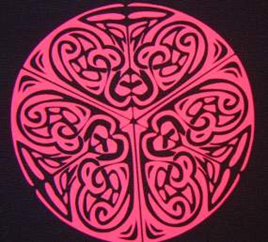 After you heat press an applique to a garment, how long should you wait before peeling the carrier or the hot mask from the applique?  A number of variables come into play. The answer depends in part on the physical properties of the hot melt adhesive and the type of carrier used on the heat transfer film. Of course, there’s more to it than that.

Each film is a little different from one manufacturer to the next, from one product line to the next.  You should refer to the information that the manufacturer provides.  In most cases the manufacturer’s guidelines are a good starting point.  For example, you can remove the carrier from most of the RTape polyurethane films, such as FlexCut Sticky and Tatoo, in three to five seconds after heat pressing. VelCut flock films require more cool down time after heat pressing. For the flock appliques, you should wait at least 20 seconds before removing the carrier.   These guidelines work for applications to most garments.

This general rule may not work for every application, though.  How a hot melt adhesive adheres to a fabric can vary from one garment manufacturer to another. Fabrics colored with some dyes, may require modification of your heat press process. The weight of the fabric also affects the rate at which the garment and applique will cool down. Heavier fabric will require more time to cool down than thinner, lighter weight materials. That means you will probably need to wait a little longer before peeling the carrier.

The Role of the Liner or Carrier

The strength of adhesive bond to the fabric is opposed by the peel adhesion value of the liner. Peel adhesion is the amount of force, measured in grams, required to remove the film from its carrier. Peel adhesion of the liner depends on its physical properties, such as surface finish (glossy or matte), acrylic mass, silicone mass, high release chemical components.

Manufacturers use a variety of release liners with a wide range of release values.  If the release value of the carrier is low, a hot peel is generally possible, immediately after the heat press opens. If the release liner has a medium release value, a warm peel is recommended after three to five seconds after heat pressing.  The higher the peel adhesion value is, the longer you will need to wait before removing the liner or carrier. When the release strength of the liner or carrier is high, a cold peel is recommended, which can take twenty to thirty seconds.

What’s important, is that you carefully qualify the products that you are working with so that you understand the performance characteristics, before you use these materials in production.

When an applique does not adhere properly, here are some remedies that you may try: