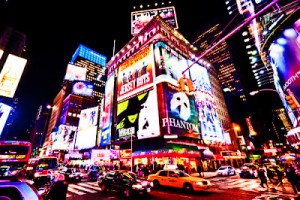 When decorating acrylic sheet, selecting the right vinyl film for the job depends on a variety of factors:

Usually vinyl films stick to acrylic like white on rice. But not always.  Additives in the acrylic sheet can inhibit adhesion causing failure of the graphics.  Even if the film adheres well initially, lubricants and plasticizers in the sheet can eventually weaken the adhesive bond, causing the vinyl to peel and delaminate from the substrate.

As a precaution against failure, the best bet is to “Test, Don’t Guess”.  Ideally, you should test adhesion immediately following application and then twenty-four hours after application. If the adhesion drops dramatically a day after applying the film, it tells you that something in the acrylic sheet has adversely interacted with the vinyl film’s adhesive.

For internally illuminated signage, both cast and calendered vinyl films are used.  The type of film that you select for a project often depends on the application, durability requirements and your customer’s budget. For less demanding interior applications, such as menu boards, a calendered translucent vinyl suffices. For long-term, outdoor backlit applications, a cast vinyl film is your best choice.

An internally illuminated sign boxes can get hot.  Really hot.  Over 150° F! Subjected to prolonged high temperatures, many calendered films can discolor, shrink and crack.

Application Procedure. Even if a plastic sheet includes protective masking, you must clean the sign face before applying the graphics. Some professional decal installers only apply vinyl dry. In most cases, I agree that dry application is the way to go.  However, applying a translucent vinyl to a plastic sign face is the exception to the rule, because the sign face tends to attract vinyl like a magnet. For this reason, I believe wet applications serve such jobs better. You can make your own application fluid by mixing 1/2 teaspoon of a dishwashing detergent, 1/2 teaspoon of isopropyl alcohol and 20 oz. of water. If you make your own concoction, don’t use dishwashing liquid that contains moisturizing lotions, which contaminate the vinyl’s adhesive and can create adhesion failure.

The much better alternative is to use a commercial application fluid, such as Rapid Tac. Here’s my reasoning.  What is the likelihood that the person you assign to make your homemade application fluid is going to measure anything?  On top of that, if that person cannot find a dishwashing liquid, isn’t it also likely that the first thing that he finds that is remotely close to it, he’ll toss into the mixture.

The point is that companies that make application fluid know what they are doing. They use the right ingredients. All of those ingredients are precisely measured.  And their products are routinely checked for quality assurance. So why not spend a little bit more on a commercial application fluid and use a product that won’t contaminate the adhesive and cause a failure?

Rule number two: be careful not to get the release liner wet, if it is a kraft paper type of liner. Chunks of the siliconization layer can flake off of the liner and contaminate the adhesive. When the sign is illuminated, these areas appear as dark blotches.

When applying graphics, many installers start in the center.  From that starting point, apply the graphics on one side and then work to the other outside edge.  This isn’t the only method of application. The key is to find a technique that works for you. When you find it, continue to use it.  If an application technique isn’t working, find one that will.

Rule number three: however you decide to tackle the application, you must apply enough squeegee pressure to force any application fluid from under the vinyl, and always use overlapping strokes.

Rule number four: if the graphic is covered with an application tape, after removing it, re-squeegee the entire graphic using a squeegee covered with a low-friction sleeve. The sleeve will protect the vinyl from scratches. More importantly, re-squeegeeing will ensure that any edges that may have pulled away from the surface, when you removed the application tape, are secure.

When working with translucent films, avoid seams if you can. When translucent films overlap, the seam will be noticeable when the sign box is illuminated. Of course, overlaps aren’t always avoidable, but keep them to a minimum.

Seams generally shouldn’t exceed 1/16 in. for cast film. Shrinkage of calendered film is about twice that of cast so the overlap should be a 1/8th of an inch. Abutting films can shrink and leave a noticeable gap when the sign is lit.

The film’s light and color transmission can vary from roll to roll — sometimes, even within a single roll. Therefore, overlap films from the same roll or lot number. Even then, color variations and inconsistencies can occur within the same roll. For this reason, if a film needs to be seamed, take the time to match colors to ensure consistent appearance.