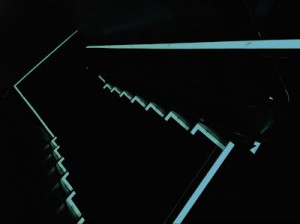 Daylight and fluorescent lighting can activate photoluminescent materials using zinc sulfinde in less than five minutes. Exposing these films to incandescent light can take longer to fully charge the materials, because this lighting emits more yellow light than blue light.

Here’s how photoluminescent material works. The electrons, which revolve around the nucleus of the pigment molecule, absorb the photons from the light source. In doing this, the electrons of the molecules become excited or energized, which boosts the electrons from their standard orbit to a higher orbit.  For the excited electron to drop down to its original standard orbit, it need heat or it will stay in the higher orbit. As the electron returns to its standard orbit, the excited electron undergoes a transitional state, which releases the energy that it has absorbed in the form of visible light. The material glows as long as the electrons are in this transitional state. This photoluminescent pigment can be recharged over and over again and continue to emit an afterglow for as many as ten to twenty years.

Photoluminescent materials, of course, aren’t the only substances that have an afterglow. For example, radioactive materials give off an afterglow as they decay. There’s no reason to worry about phosphorescent films and inks. They aren’t radioactive and they don’t have an electrical charge.

About GlowEfx™ Photoluminescent Films. RTape Corp. recently introduced its GlowEfx™, which represents a significant improvement over its earlier generations of photoluminescent vinyl films.  Exposure to indoor fluorescent or incandescent light as well as direct or indirect sunlight rapidly charges the glow-in-the-dark vinyl film. Utilizing strontium aluminate pigments, GlowEfx™ emits a bright greenish glow, when the lights go out. Its glow is  visible to the dark adapted eye for up to an hour, which is much  longer than  short-lived zinc sulfide films.

For easy handling during application, GlowEfx™ is coated with an easy-to-apply, permanent modified acrylic adhesive. The film exhibits good adhesion to a variety of smooth, flat substrates, such as sign blanks and painted drywall.

Designed for CPSIA compliance, GlowEfx™ is eco-friendly and child-safe. It is lead-free and phthalate-free.  Its phosphors are derived from natural rare earth minerals, which are non-toxic and non-radioactive.

For more information, please call your RTape distributor or visit the RTape website at www.rtape.com.