Wrapping a Ferrari may sound like a sexy job – and it is – but it’s unlike most other vehicle wraps. Find out how.

Few cars are curvier than a Ferrari. Discover how to navigate the challenges of applying vinyl to a racecar.

What do you get when you cross Avery Graphics film with a Ferrari F430? One hot car!

APE Wraps did just that with one of Motorola’s racecars and displayed it proudly at the 2008 SEMA Show. APE Wraps’ proposition: Lend us the car and get a free wrap.

“In this economy, this was a no brainer for Motorola,” says Troy Downey, owner at APE Wraps, a Coronado, Calif.-based vehicle wrapping shop. “Motorola got a free wrap and they also got tremendous exposure at the show.”

APE Wraps wrapped the Ferrari F430 live and in living color on the showroom floor. It was the Motorola racecar that competes in the Ferrari Challenge, Ferrari’s racing series. Ferraris racing in the series are very carefully prepared and maintained for competition.

The car is modified to enhance safety in racing. For instance, the Ferraris that race in the challenge don full roll cages, special racing seats and safety harnesses, fire systems and similar safety devices. There are slight modifications to some body panels. 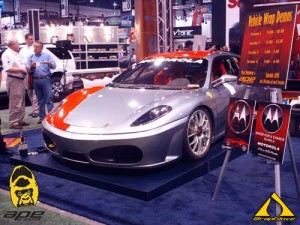 MPI 1005 Easy Apply RS Cast Vinyl film is a premium gloss opaque vinyl designed for use in fleet and vehicle graphics as well as corporate identification applications. Avery Dennison’s Easy Apply technology offers the benefits of reduced wrinkling and air entrapment inherent in the application of decals and graphics as well as repositionability and slideability for exact positioning, according to Waters.

“With most films, if you were to strip the liner paper off of the graphic and lay it down on the hood of a vehicle, it will start to tack and it becomes very difficult to work with,” Waters explains. “That’s why many times installers only peel off half the vinyl and work with it. This MPI 1005 product actually stands off the surface so that you can take it and slide it on the hood of the car with the liner completely removed.” 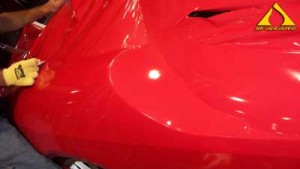 From there, Waters explains, you can squeegee the film down. If you realize it’s not in the exact position you wanted, you can snap it back up – so long as you have not made a cut in the film. Once you make a cut it sends the bodyline and you are hard-pressed to get it back in the exact same position.

“With that in mind, and considering how complicated the curves in Ferraris are, the installers would constantly squeegee it a little bit, snap up the film up a little and then squeegee some more,” Waters says. “They use heat to soften the film and help it conform around the body’s convex curves.” 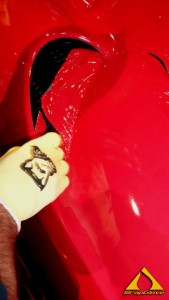 “We can’t be at every race, so we have to accommodate for the car possibly being in an accident,” Downey says. “Most of these cars end up banging into the wall once or twice and have to be fixed.

“So when we design a racecar, even though there’s one car with a wrap, we end up wrapping two and a half cars to support one car,” Downey continues. “We wrap two front ends, two sets of doors, etcetera, so that if they have to replace the components on-site the car retains the wrapped look. The car is representing the brand so it needs to look its best.”

Downey likens designing for a Ferrari to wrapping an egg. That means the designer has to understand the shape of the vehicle when designing the mock up. It must be 99 percent on target with what he shows the client or he risks not getting paid.

As Downey puts it, anybody can design the side of a trailer or even a Volkswagen. But if the designer doesn’t understand the complex curves of a Ferrari and the body surface area, it can turn into a nightmare. What looks good on the screen won’t turn out well in application – if it even fits. 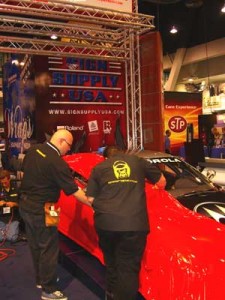 “With the Ferrari, it looks like a paint job. We sought perfection with the execution on the application,” Downey says. “You can take a perfect design that’s designed to exactly fit the car, but it’s only as good as the installer.”

Downey wrapped the Ferrari with four pieces of material. That means there’s only four seems in the entire design. Waters says you can’t even see them unless he points them out.

“The designer does his job to make the parts flow well together and put seams in places where they aren’t so visible,” Waters explains. “They put a lot of thought into the design on this so that it makes it easy for the race team to change the graphics out if they need to because of damage to the vehicle or to the graphic.” 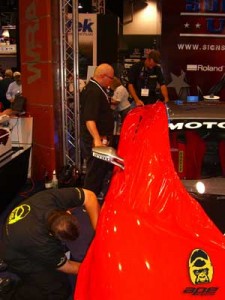 APE Wraps wrapped the car in separate components to accommodate the need for quick repairs on the fly, but Downey says if he was to do it as one component he would start in the middle and work his way out so he doesn’t end up squirfing (squirfing a term I use for image distortion during install) the graphic.

Starting at the rear and working his way forward could cause some major misalignments if he’s off by even as little as quarter inch. That’s because the time he is finished working his way to the front, he could be off as much as three inches.

“We cut the car up in sections. So, for instance, on side of the Ferrari there is a 5-foot tall panel by 20 feet long. So our first application would probably be one squeegee with all the way down the center of the car, right in the middle of the door, going right to left,” Downey explains. “Now that I have my middle laid down and I know that my graphic is straight I can start sticking it.”

Next, Downey works the bottom down as his next surface, then the upper surface up and over the fenders and finally the doorframe. With the Motorola logo on the Ferrari, for example, Downey started in the center and worked one side down, then worked the other side down.

With the Ferrari, there is plenty to consider. For starters, you have to determine how you are going to approach coverage intakes and cooling ducts while still making it look like a monolithic wrap.

For example, if the car was purple and you wanted to lay a red graphic over the top of it, you have to make sure the purple is completely covered or the original color of the car will be revealed. In this case, the Ferrari’s intakes were painted black, which is the best color for wrapping because the seams in the doors don’t show.

Downey credits the film with helping to make the job easier. “The Avery EZ RS film enables us to reposition this material without having to bleed our way through it or distort the image,” Downey says. “If the other media companies don’t produce or simulate what the EZ RS is doing, no one will be using the other media in the next couple of years. I no longer am concerned about how close that trashcan is to my car.” 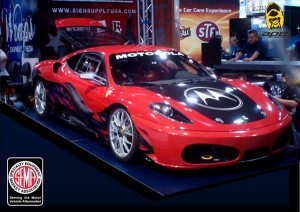