Once a graphic starts peeling, forget about trying to reapply any edges, which have already lifted. The adhesive on these peeled edges have most likely been contaminated with dirt. 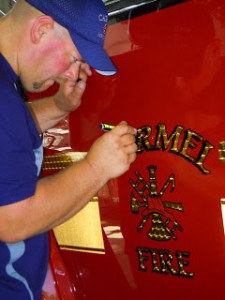 Edge lifting isn’t the end of world, though. In many cases, you don’t need to go through the time and expense of removing the entire applied graphic and starting from scratch. Quite often all that is needed is minor surgery and a little tender loving care.

Here’s what I mean. Using an Xacto® with a #11 blade or a stainless steel Olfa graphics knife, cut the applied vinyl, at a place where it has not yet lifted but adjoining the edge of the lifting material. This is precision work requiring a gentle touch and a sharp blade. If your blade is old and dull, replace it with a brand new one. Usually, if the blade is not sharp, you will compensate by pressing harder. This often does more harm than good, resulting in cutting into the substrate.

When cutting on a painted surface, such as a customer’s car or truck, be extremely careful. Especially, if this is someone’s very expensive toy. Cutting too deeply into the paint job, can expose the metal to moisture, resulting in rust and a very annoyed or angry customer.

With the surface cleaned, you must edge seal the graphic to prevent further lifting. For this application, many sign makers use a SEALITPEN, which was developed by pinstriping legend “East Coast Artie” Schilling. Resembling a felt tipped marker, the pens are filled with an acrylic clear coat. If you don’t want to contend with the mess involved in using a brush, this little pen is a neat way to apply edge sealer.

Applying edge sealer with a SEALITPEN is neat, quick and convenient and prevents edge peeling problems for occurring in the first place.

Many professional decal installers prefer applying edge sealer, such as 3M Brand 3950 or Butch Anton’s Frog Juice, straight from the can. Painting the sealer on with a brush applies heavy coating to secure the edges.

3950 is actually nothing more than 3M’s 3900 series solvent-based screen print clear coat. Back in my decal installing days, I would fill baby food jars with clear coat for edge sealing graphic. Instead of using the spherical fiber dabber that comes with the 3950 sealer, I prefer brushing clear coat with a #6 quill. With this brush, you can apply a thick ½” line of clear coat to seal the edges. Ideally, half of the clear coat will be on the vinyl graphic and the other half will be on the substrate.

In many cases, the remedy that I prescribed will cure the majority of edge peeling maladies. Will it work every time? No. But whatever does? If the problem resulted from poor surface preparation or shrinkage caused by solvents in an ink, it is likely that the problem will reoccur.