What is Dye Sublimation?

Heat serves two critical functions in this dying process.  First, the heat causes the pores of the polyester fabric to open up, so the material can accept the dye.  And second, the heat converts the solid ink dye on a transfer sheet into a gas.

Under pressure of the heat press, the gaseous dye is forced into the open pores of the polyester.  As the temperature drops, the pores close up capturing the dye inside of the bonds to the substrate.

The sublimated color is very durable because the dye becomes an integral   part of the fabric, rather than a colorant on the outside of the fibers of the fabric, which can bleed and fade.  Sublimated fabrics can be washed again and again,

without losing the vibrancy of its color.

There’s one slight catch, though. When you heat press an applique onto a sublimated garment, the high heat can release the dye in the fabric.  These dyes can then migrate and discolor an applique. 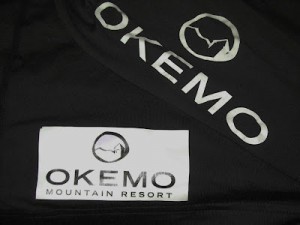 Without an anti-migration blocking layer, dye migration can discolor an applique. In the photo above the white polyurethane film turned a light grey within 72 hours of heat pressing.

Discoloration resulting from dye migration does not occur immediately. Instead it is a gradual process, which may take as long as 72 hours to occur.  For example, a white applique heat pressed onto a black sublimated garment is likely to turn grey over time.

To prevent discoloration, many of our RTape heat transfer films incorporate our SubliBlock (SBB) blocking layer.  These products incorporate a second layer of  film, which blocks dye migration. While this second layer adds to the thickness of the applique, it is much more effective in preventing discoloration compared to other products, which utilize adhesive additives to perform the blocking function.