Who hasn’t had the occasional problem in transferring vinyl graphics from its release liner? In many cases, the solution may be as simple as selecting a higher tack tape, or making a slight change in your application procedure. Here are a few pick up tips to make transferring vinyl a more uplifting experience. 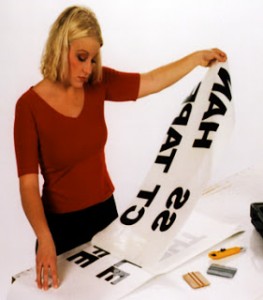 The tape won’t pick up the graphics! The problem may not be with the tape or the vinyl. Could it be something you did or didn’t do?
Some vinyl films utilize release liners with a tight release. The   release value is the amount of force required to peel the vinyl film from its liner. A film with a tight release keeps the film from slipping and sliding on the liner during plotter cutting. The high release is great when you’re cutting small letters and fine detail. But it can make transferring the graphic more difficult.  Transferring high gloss films, highly textured films and vinyl with a “boardy” or stiff facestock, can also be problematic. Application tapes with a slightly higher tack, such as RTape 4076RLA®, are designed for the “hard-to-lift” films.

Difficulties in transferring vinyl often occur in environments with high humidity, such as Florida. Colder temperatures also cause problems. At lower temperatures the adhesive on the application tape is less malleable and will not wet out on the surface of the vinyl quite so readily, as when it is warmer. In these environments, the slightly higher tack tapes do a better job of lifting graphics.

To minimize problems make sure that you use good pressure when laminating the application tape. Remember: pressure-sensitive tapes need pressure to stick.  Firm squeegee pressure in the laminating process and the heat generated from the friction of the squeegee aids the adhesive in wetting out and sticking to the vinyl’s surface.

There’s a right way and a wrong way to do everything. The right way to transfer graphics is to turn the graphic over so the tape is against your work surface, after applying the application tape to the vinyl. Peel the release liner from the back of the graphics, rolling it 180°against itself (as shown in Photo #1), rather than trying to pick the graphics off of the liner. 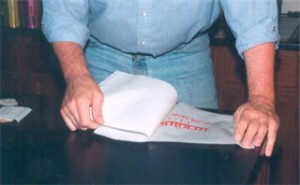 If the graphics release with difficulty from the release liner, rub the back of the liner against a sharp edge of your work bench as shown in Photo #2. This will help break the bond between the vinyl’s adhesive and the release liner, making transfer of your graphics easier. 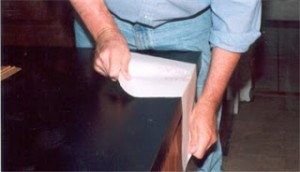