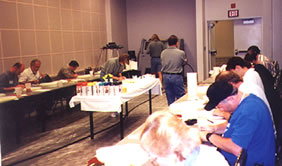 Are you ready for prime time? Learn about educational programs that teach you the ins and outs of computerized routers.

As dimensional signs gain momentum, many sign makers are seeking formal education to help them get the biggest bang for their routing bucks.

So you’ve made a major investment in a CNC router. You went whole hog with a top of the line machine that features all the bells and whistles a sign maker could ever dream of.

You are set to realize the promises the salesman made when he sold it to you: increased productivity, higher quality and greater profits. There’s only one problem. How do you use the thing?

Manufacturers typically offer some preliminary training, but for the most part it consists of very basic set up and icon identification, not hands-on instruction. But some key players are stepping up with more in-depth training for sign makers looking to get the biggest bang on their CNC bucks, according to Gerber senior product manager Scott Anthony.

“You can very easily go from flat graphics to dimensional signs,” says Anthony. “But you have to know how to price, how to design, how to finish and decorate, how to incorporate all of these components.”

That, says Anthony, often means seeking out formal education. While CNC education options are limited, there are a few programs in the industry garnering both the attention and respect of sign makers. There are several woodcarving programs recommended by the International Sign Association, but Northcoast Signworks and Vermont Sign School run the two of the most notable programs designed specifically with computerized routing in mind.

The ABCs of 3-D
Northcoast Signworks President Jim Hamilton had carved a niche in the industry making vinyl signs and always thought he would have to become a master craftsman or an artisan to make beautiful carved wood signs. This led him to start programs for other would-be sign carvers.

In 1997, Hamilton approached the education director at National Business Media (NBM) and officially launched the first in a series of seminars and workshops called “ABCs of 3-D” in conjunction with NBM shows. This course teaches sign makers some much-needed basics, like how to use plotters and jigsaws, how to cut templates and how to do sandblasting.

Northcoast also offers a workshop on advanced router techniques that picks up where the “ABCs” course leaves off, with step by step instruction on using digital printing and combining it with cut-outs from the CNC router. The emphasis in this workshop is how to match all the files together.

Sign makers also get an introduction to a variety of new substrates ­ like high-density urethane ­ that Hamilton believes the industry is gravitating toward. Northcoast also partnered with DuPont to show the ease of working with Corian, a countertop material that is catching on in the sign industry. Corian looks like granite but it’s an acrylic slab stock base that Hamilton says “cuts like butter on a router.”

“So many ‘tech heads’ get into dimensional sign making ­ they know all about computers, they are familiar with plotters ­ but they lack some knowledge,” says Hamilton.

Avoiding Beginner’s Mistakes
One of the biggest mistakes beginners make, says Hamilton, is coordinating the router spindle speeds and selecting the correct router bit to cut different materials. If you are cutting a piece of aluminum, for example, then you are not going to run the same speeds with the same type bit as you would if you were cutting a soft material like high-density urethane.

Sign makers face a similar dilemma with simple finishing, says Hamilton. PVC plastic, for example, is only available in white and black, so to change its appearance you have to back-coat it with colored vinyl. “There’s a certain bit that will cut through and chew the vinyl cleanly and make a good cut on the plastic,” says Hamilton, “but there’s another bit that would just cut the plastic clean but rip apart the side of the vinyl.”

Advanced Techniques and Workflow Strategies
Another frustrating problem for sign makers is a lack of understanding about how to finish carved signs. Since many sign makers coming to CNC machining with a vinyl background, they are often unfamiliar and intimidated with painting, according to Hamilton.

The advanced class concentrates on quick finishing techniques, showing sign makers when to pre-paint a blank, what primers to use, and how to keep color selection in check so they don’t end up with a bunch of paint cans mixed with different colors they may never use again.

The third seminar focuses on workflow strategy i.e. how to organize the day around the characteristics of routing work. “You have to understand the importance of getting those paint coats down and never missing a step on a project, and in the interim make sure that you’ve got everything else going on in your shop,” says Hamilton, who gives marketing tips while the paint dries at the workshops.

Education, Practice, Experiment
At Vermont Sign School, carving traditionalist Jay Cooke also runs educational programs for sign makers trying to learn how to drive the most profit and creativity from their routers. Vermont Sign School runs week-long seminars that give attendees a solid overview and sends them back to their home bases to practice what they’ve learned.

Cooke notes that incorporating good design with the power of the router is often a challenge sign makers face. Another is understanding that the router creates raw material ­ not a finished product. Therefore, he says, you need to have a good knowledge of chemistry, painting and coating so that the raw material you create is properly treated.

Cooke cautions sign makers to take time getting into routing instead of rushing to get a return on what is often admittedly a hefty investment. “Don’t rush if you don’t have to,” says Cooke. “So many people get routers and start doing jobs the next day to try to pay for them, as opposed to setting a time scheme to make sure they know what they are doing.”

“If I make this sign and another professional sign maker sees it will they be impressed? If the answer is no, then you are not ready for prime time,” says Cooke. “That should be the standard test.”