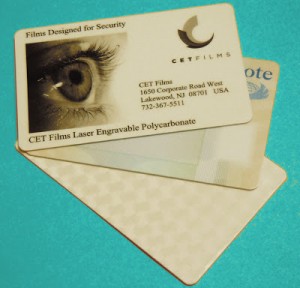 Clariguard™ incorporates a new non-carbon additive in the polycarbonate, which enables certain types of lasers to create a photographic image inside the film itself.

Here’s how Clariguard™ works. To create a tamper-proof docu­ment, you only need a single sheet of CET’s new laser engravable polycarbonate. Clariguard™ incorporates a new non-carbon additive in the polycarbonate, which enables certain types of lasers to create a photographic image inside the film itself.

As a laser beam exposes the film, it converts a proprietary non-carbon additive into black particles, producing a permanent image. Because the image is inside the film, rather than on the surface of the film, it cannot be tamper with.

Because the engraving of the image occurs inside the film itself, Clariguard™ is also a much more cost-effective and more secure alternative to multi-layer laminated security documents. Sensitive information is not sandwiched between multiple laminated overlays.

Once the document is engraved, criminals cannot tamper with and alter the im­age. Sensitive security documents are safe and secure. And because Clariguard™ is made of durable polycarbonate, it can withstand thousands of flexes and provide up to 10 years of rigorous use.

While Clariguard™ can be used to manufacture single film security cards, the base stock polycarbonate film can also be permanently fused with other Clariguard™ films for composite cards.