Outgassing refers to the release of a gas from some type of material. Natural materials, such as plywood, can outgas vapors as the glues used in its manufacturing cure. Just about any synthetic substance will outgas, too. The list of synthetic materials includes paint, polycarbonate and fiberglass. 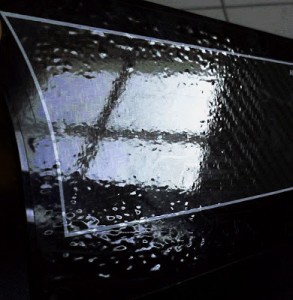 As a rule of thumb, polycarbonate sheets should be dried before decoration. Drying in recirculating oven at for 250° F for at least four hours will drive off any moisture vapor and oxygen within the sheet.

Some materials, such as polycarbonate, outgas because they absorb a vapor and then gradually release or “de-absorb” that vapor.  Other substances, such as paint, outgas the solvent within the mixture cures. Fiberglass and other thermoplastics outgas as a byproduct of a exothermic chemical reaction.

Some of manufactured materials will outgas within days or weeks. Other substances take longer. Fiberglass, for example, can continue to outgas for years. Low ambient temperatures can delay the process. An automotive paint, which typically cure in 72 hours, can take much longer if the vehicle is left outside in cold temperatures.

Outgassing frequently causes problems with applied graphics. As the volatiles within the substrate migrate out of it, bubbles form under the applied film. Some films allow gases to readily breathe through the films. Some films don’t.  This is a substrate problem. It is not a film problem.

“Outgassing has been a problem for the electronic and automotive industries for a long time,” says RTape’s Manager for Product Development and Quality Assurance, Darryl Liedel. “When you buy a new car, that distinctive “new car smell” is formaldehyde and other volatile vapors,” he adds. “The smell of paint or fiberglass is also distinctive. These are  gases that haven’t fully cured.”

“Any of the solvents that have not yet dried are caught under the laminated film causing these bubbles,” says Liedel.  “ The larger the graphic, the worse this issue will be. With some smaller graphics, the entrapped gasses can escape out the edge. With the larger graphics, the path of least resistance for these gases is an air bubble.”

Testing Procedure. In some cases a material can pass the smell test, but is still emitting vapors. So how can you determine, if a substrate is still  outgassing? Here’s a simple test that you can perform. Apply a 6” x 6” piece of polyester film to the substrate in question. If the substrate is still outgassing, bubbles will appear within 24 hours with ambient temperatures at or above 70⁰ F or (21⁰ C). If outgassing has stopped, bubbles will not have formed and you should be good to go.