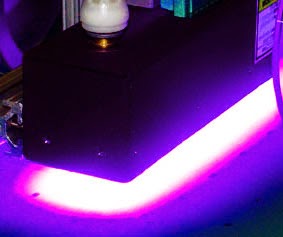 UV ink cures when it is exposed to UV light. In this curing process, the photo initiators in the ink absorb the UV energy and break down into reactive components that initiate the polymerization process.

Polymerization is the chemical process in which the smaller monomers and oligomers bond together to form the much larger polymer molecules.  As the smaller molecules polymerize, they entrap the pigments, which give the ink its color and the additives in the cured solid inks.

The differences between UV inkjet systems are the ink formulations and the types of curing lamps used. Traditional UV lamps emit a broad spectrum of UV light. By comparison, the band of UV light which LED curing systems is much narrower. The ink formulations for both types of inkjet printers must be matched to the light source in order for polymerization to occur.

In addition to producing UV light, traditional UV lamps also generate heat-producing infrared light.  This infrared light serves no function in the curing process.  But it does produce a significant amount of heat. Since much of the media used in wide format digital printing is plastic (such as pressure sensitive vinyl films and thin plastic sheet), that high heat can cause problems including shrinking, warping and discoloration.

UV LED curing systems provide a cooler cure, which eliminates these heat related problems. Lower temperatures allow for printing on heat sensitive materials, such as pressure sensitive vinyls and unsupported polycarbonate films. Because UV LEDs minimize the incidence of warping media, the chance of a head strike is less likely.

Inkjet printers utilizing LED UV curing systems have grown in popularity as the technology has advanced.Improvements in these systems ensure reliable and faster curing of inks, and provide for high quality printing as well as improved production output.

While the initial cost of LED systems is typically high than traditional UV inkjet systems, the lifetime cost may be lower, when you take into consideration the lower operating cost and the longer service life of the LED curing lamps.

Here’s how the two types of UV inkjet printing systems differ and what it can mean to you:

No Warm Up Time. Unlike traditional UV curing lamps which need to warm up prior to printing, LED UV lamps require no warm up time and allow for printing as soon as they are turned on.

Cooler Operating Temperatures. Traditional UV lamps can produce significant heat. This can create a number of problems when printing on some plastic substrates. High heat can warp substrates which can cause head strike problems when printing. Cooler operating temperatures also allow shops to print on thinner and in some cases less costly materials.

Longer Service Life. Traditional UV lamps last about 1000 to 2000 hours, requiring replacement. Traditional lamps also decrease in efficiency over their service life. LED curing lamps, on the other hand, provide about 10,000 to 20,000 hours of operation, which means that these curing lamps will probably last longer than the inkjet printer itself.

Lower Operating Costs. Traditional UV curing lamps consume a tremendous amount of electricity. LED curing lamps are much more cost effective to operate. Shops may realize savings of 60% to 80% in their utility expenses.