Solvent and ecosolvent inks allow you to print onto various types of uncoated films, including RTape’s VinylEfx® vinyl print media. As wonderful and easy to use as these print systems are, you must test and evaluate the inks and your printer settings prior to production. Incompatibility between the ink system and the print media could be problematic. 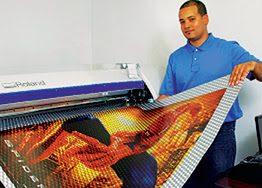 When you are printing with solvent or ecosolvent inks on films, such as   VinylEfx®,  you must carefully control ink density. Heavy ink concentration, which occurs when you print a solid color or drop shadows, contributes to shrinking and curling. When printing on ChalkTalk®, a modified styrene, too heavy of an ink deposit can embrittle the film, frequently resulting in cracking. This fact alone should raise concern when attempting to print on this film with solvent or ecosolvent inks.

To minimize curling and other adverse effects when printing on films, such as  VinylEfx®, adjust your ink limit to less than 250%. In addition, never print to the edge of the media. Instead, provide a 1/4-in. ( 6mm), outline around the printed image.

Heavy ink concentrations can cause other problems.  They can take forever to dry. The ink can also bleed or puddle into ink islands.

To minimize bleeding, slow your printing speed. The slower speed also reduces the likelihood of vinyl contraction, because the ink has extra time to start  drying before another ink layer is printed. The downside is, of course, less printing efficiency.

To accelerate the drying of the inks, you may be tempted to increase the dryer temperatures. Easy does it! During heating, the expanding film can tunnel on the release liner. Tunnels between the film and release liner can form as the heated film under the dryer expands and pushes against a cooler, rigid, film mass.

When printing onto high gloss films, such as cast vinyls or RTape’s  VinylEfx®, use lower-resolution settings. On glossier films, this will help prevent the dots of higher-resolution prints from running together.

When printing higher resolutions, in addition to adjusting the density curve in your profile to control the amount of ink that you print, reduce your print speed. You’ll experience less bleeding, especially when printing onto glossy films. You also give the ink more time to dry before the printheads make another pass. Generally, you get better results with matte-finish films, as opposed to glossy ones.

Printing on RTape’s ChalkTalk® with solvent and ecosolvent inks is not advisable for another reason other than the potential for cracking. These  inks are transparent. The slate grey of the ChalkTalk film will show through. My suggestion is, if you have the option of printing with a UV inkjet system, that’s your best choice, especially if you have white ink.

UV inks are 100% solids. What that means is 100% of what is deposited on the substrate is cured. What’s more, UV inks are opaque. The ideal way to print on the ChalkTalk® or other films that are patterned or of a dark hue is to first print white to completely block out the background.  Then print the other colors. UV inks also allow you to print to the edge without the fear of edge curl.

Conclusion. To minimize problems, test and evaluate your media choice with your printer and inks, prior to production. By operating your equipment in a suitable environment, based on the printer manufacturer’s recommendations, and use the proper print settings you should achieve acceptable results.