For more than 40 years, John “Tramp” Warner has been painting cartoons and pinstriping. In 2008, his dedication to his craft was recognized by his peers, when he was presented with the lifetime achievement award at the Milwaukee Pinstripe Legend charity event. 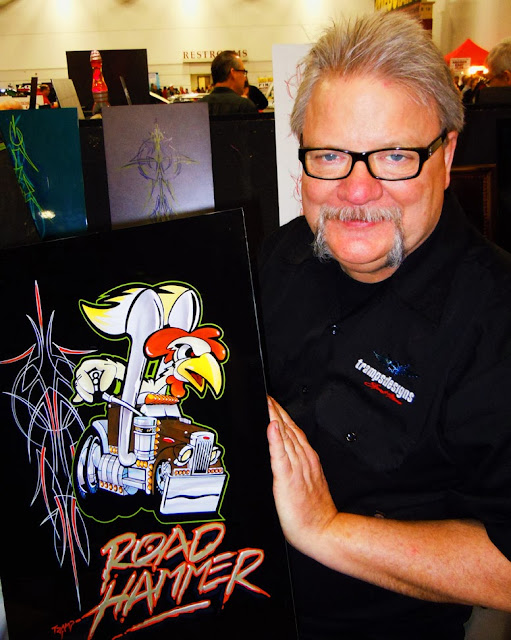 A native of the Toronto metropolitan area in Canada, Tramp began his career as a teenager, when he bought his first can of 1-Shot lettering enamel in the late sixties. That’s all it took to get him hooked on paint. Today, Tramp is a spokesperson for the 1-Shot paints. As a cartoon artist, he designed the company’s icon “Louie”.  He is so dedicated to the brand that he even has a can of One Shot paint tattooed on his arm. Now that’s what I call branding. 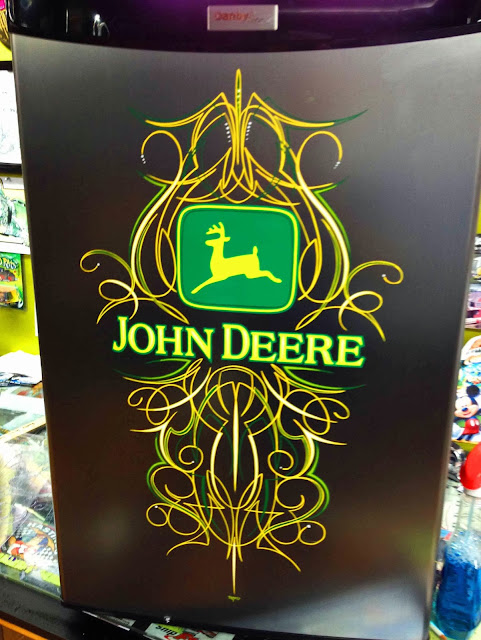 If you ask Tramp what the secret to his success was, he will unhesitatingly tell you that it is hard work. “Some people say that I am a gifted striper,” Warner says. “My gift is that I practice my craft daily. I can’t overemphasize the importance of practice. While other people spend there evenings watching TV or sitting in a bar or whatever, I’m at home practicing. If you don’t practice, you will lose your skills. As the saying goes, if you are not climbing, you’re sliding.” 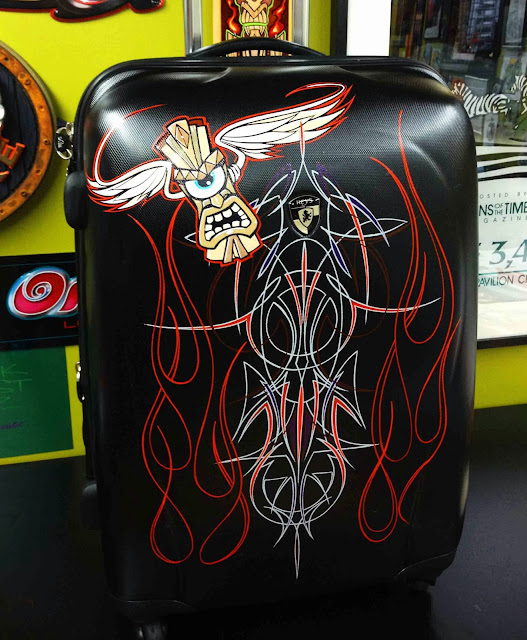 Tramp also stresses the importance of investing in your own education. “The industry is continually changing so you have to make sure that you read the trade magazines, watch the training videos and attend the industry events, such as tradeshows and letterhead meets.” Warner also recommends that sign makers, who are interested in learning how to stripe, should enroll in the seminars and workshops at these industry events. 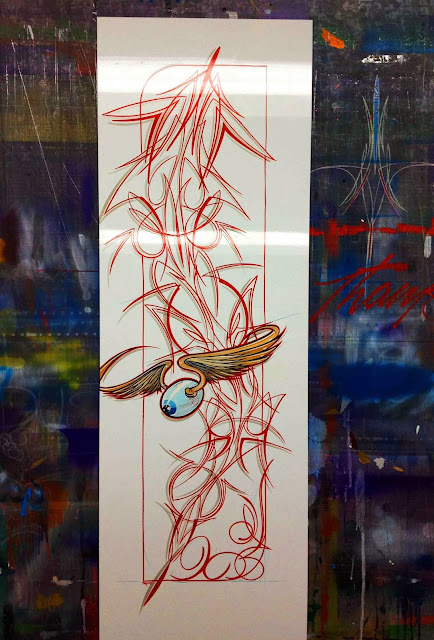 As a self-taught artist, Tramp looked to others for his inspiration. As his was learning his trade, he maintained a journal of design ideas that he clipped from trade publications or gleaned from the painters, who he admired. While Tramp learned from others, his style is truly his own. 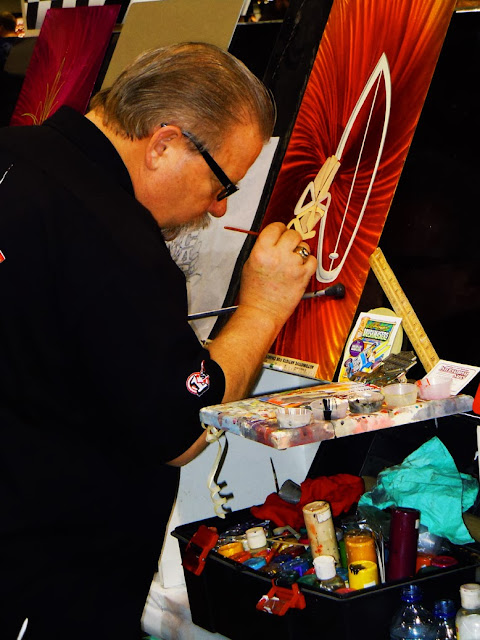 I have been privileged to know Tramp Warner for many years. In that time, I have learned a great deal from him about the paint side of the business. Here are a couple of his tips, which I would like to share with you.

Tramp says that many stripers make the mistake of overthinning their paint. “If you overthin your paint, you reduce its durability because you reduce the amount of pigment that you lay down,” Warner says.  “I have seen many stripers, who do scroll work, thin the paint to the point that it runs off of their brush. Paint that is thinned more than 10% must be clear coated with a urethane or it won’t last outdoors. And if you are going to clear coat with a urethane you must use a hardener in your paint.” Warner says that 1-Shot makes a great hardener (4007), which is formulated to accelerate the drying time of their enamels. 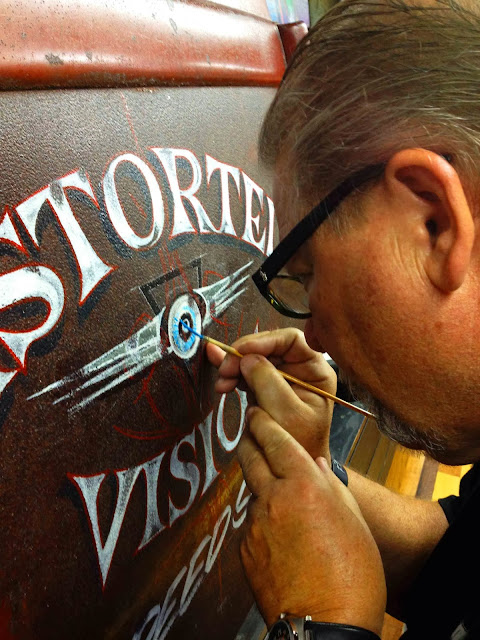 As an alternative, he suggests that you can also add the hardener that you use for the urethane clear coat as the hardener for your paint. “Other advantages of the hardener are that it improves the anchorage of the paint to the substrate; it makes the paint glossier; and  it extends the life of the paint,” says Warner. 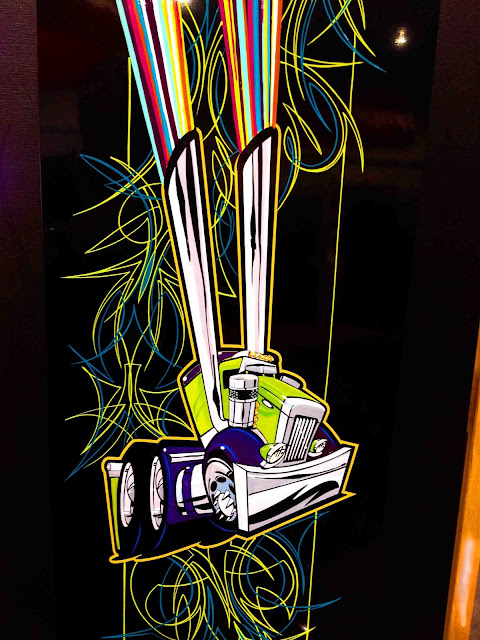 That’s why Tramp recommends using a paint thinner or enamel reduced  formulated by the paint company. Enamel reducers, which consist of (Toluene, Aliphatic Naptha, Acetone, Butoxyethanol, Methanol, Xylenes and Ethylbenzene),are formulated specifically for thinning enamels. Tramp usually uses either the 1-Shot Hi Temp or Low Temp reducers. These reducers can also be used to clean your spray gun. Another alternative is to using mineral spirits is turpentine. 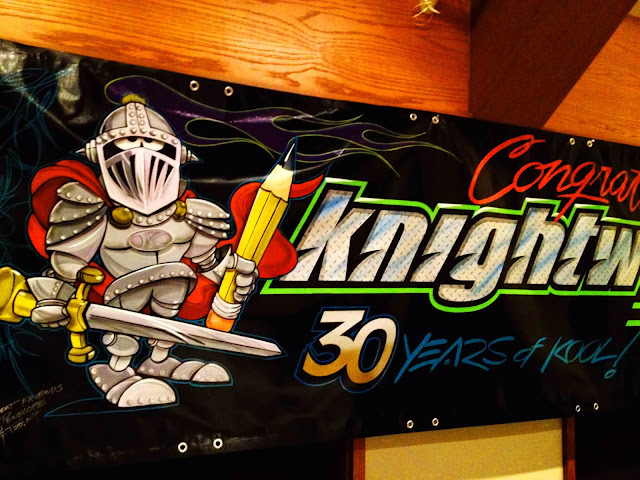 On Job Lay Out.

In laying out a job, Tramp uses a number of aids, such as a grid.  Whatever you use to draw a grid on the substrate, do not use a grease pencil.  The reason is that the paint will not penetrate the lines of grease and bond to the substrate. It’s only a matter of time before the paint fails wherever the grease is. The result is that paint comes off where the lines were and your guidelines will stick out.  “Sometimes that creates a really cool effect,” Warner says. “But more often than not, your customer usually won’t think it’s too cool.” 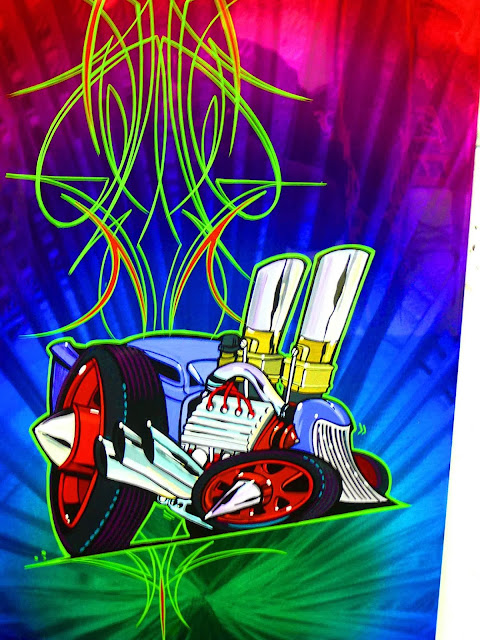 In the past, Warner had used Stabillo pencils, but has since switched to using Staedler pencils. “Some harder pencils will scratch the customer’s paint job,” says Tramp. “That’s why I use either a blue or a white Staedler pencil.” 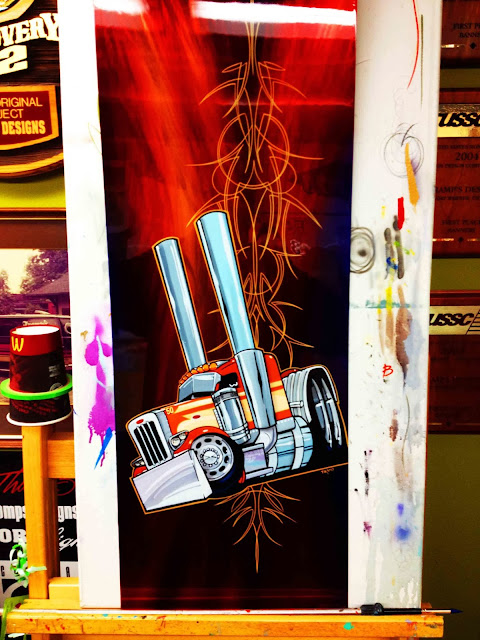 On the Bugler Striper.
Tramp Warner also recommends buying a Bugler striper for doing long straight lines.  “You aren’t cheating when you use a tool like the Bugler,” Warner explains. “The Bugler is one of the tools of the trade that helps you accomplish your job.  I keep one in my pinstriping kit because it’s a tool that can make me money.  And that’s what the sign business or any business is all about.” 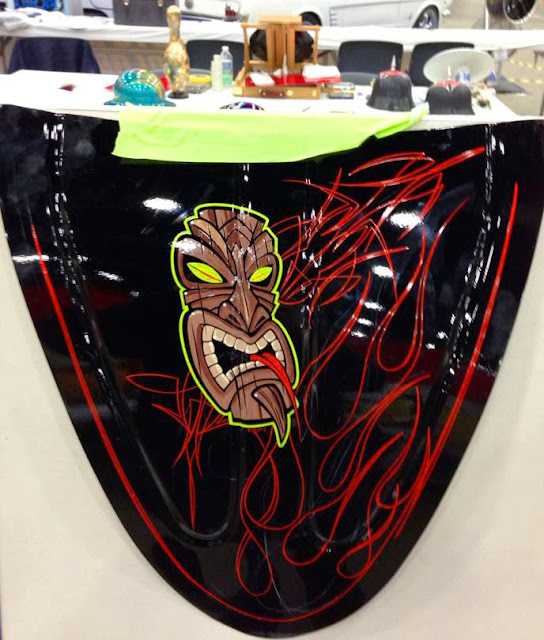 On Striping Brushes.
“I have an assortment of brushes in my case,” says Warner “but I generally work with a  few of my favorites. These include Mr. J’s Xcaliber brush, Dave Jeffery’s Virus brushes and a couple of other Mack brushes.”

Many pinstripers will customize brushes to suit their needs.  “My favorite brush is a 00 Xcaliber,” says Tramp Warner. “Some stripers will trim about 1/16” of the tip of the brush off. Anything more than that and you can screw the brush up. Generally, Xcaliber brushes don’t need to be trimmed. Just the same, I have customized a few, trimming off about half of the belly of the brush.” With these customized brushes, Tramp can make tighter turns. He explains that the downside is that the more hair that you trim from the brush, the less paint it will hold.
“If I am painting tight curves I use my customized Xcaliber brush,” explains Tramp. “By cutting out the belly of the brush, I can make a tight corner maintaining my line consistency.  I don’t calligraphy my line and I don’t have to worry about the hairs of the brush flaring out as I make the bend.”  By the term “calligraphy the line”, pinstripers refer the characteristic of varying the line thickness from thin to thick. “For some designs, line variation can add some visual interest,”  Tramp says. “Usually, I want to the line that I am pulling to stay at the same thickness.” 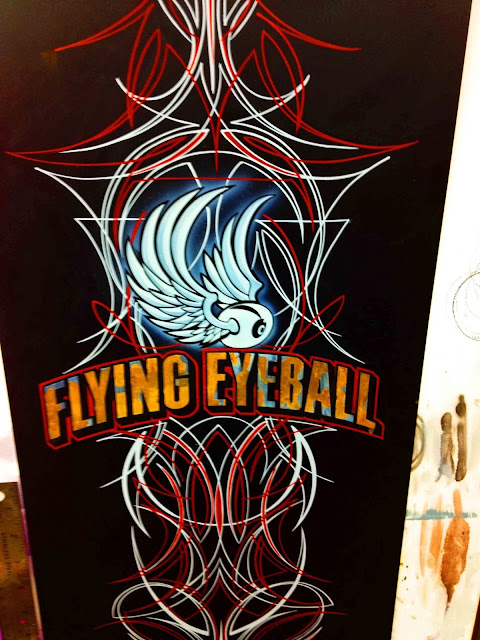 After more than 40 years of painting, Tramp is still passionate about the business. He especially gets excited about striping and lettering the big rigs. “I love the smell of coffee, diesel fumes and 1-Shot paint in the morning,” he says. Now that’s a man that really loves his job!

You can see examples of Tramp’s artistry on his website at: http://www.trampsdesigns.com/gallery.php.