Have you ever occasionally noticed a dull, hazy or blotchy appearance on the surface of some vinyl films or overlaminates? This is a condition called mottling.  There’s no reason to get too excited. While this hazy appearance certainly detracts from the aesthetic appeal of your graphics, mottling can easily be remedied, which I will explain all in due time. 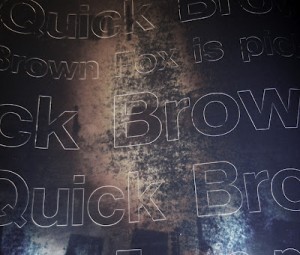 Mottling is a dull, hazy or blotchy appearance on the surface of some vinyl films or overlaminates.

Now that you know what you are looking at when you see it, let me explain why mottling occurs. Vinyl films contain plasticizers, which make them soft and pliable. Expensive cast vinyls are especially malleable. The plasticizers that make films soft, also make them very impressionable. So much so that when vinyl films and overlaminates are rolled up on a roll, the films can pick the impression of backside of the release liner.

Because vinyls are very impressionable, manufacturers, such as R Tape, take special care in how they rewind their films.  Rewind pressures should neither too tight, nor too loose.  If a film is wound too tightly, the added pressure squeezes the first surface of the vinyl against the underside of the release liner, exacerbating mottling.  On the other hand, if rewind pressure is too loose, the outer surface of the vinyl film can rub against  the liner, dulling its surface.

Heat and humidity can contribute to the mottling problem.  That’s why more mottling occurs in the summertime.  Here’s what happens.  Most of the pressure-sensitive vinyl films and vinyl overlaminates are manufactured with paper liners.  Paper is a natural material, comprised of plant fibers, which can absorb moisture like a sponge.  When liners absorb moisture they swell and grow, especially at the ends of rolls, which are exposed to outside air.  This is why mottling  sometimes appears running the length of the outside edges of roll, while the inside of the roll of film is nice and shiny. Heat will also soften the vinyl allowing it to take an impression more easily.

In many cases, vinyl films can leave the manufacturer in perfect condition, either to develop mottling inside the baking heat of an over-the-road trailer, or after it is stored in the heat of a warehouse.  To prevent rolls of film from developing this condition after you receive the material, store the film in a cool part of your shop, away from direct sunlight standing on end to prevent pressure from the weight of the roll creating a flat spot or mottle line.

Not to be confused with mottling, some cold glue overlaminates can exhibit a similar blotchy, “orange peel” pattern.  The difference is that the unappealing appearance is in the adhesive and not in the film.  This similar condition occurs most often with overlaminates manufactured with a paper release liner. The “orange peel” effect, which is especially noticeable over the dark colors of a print, results from the adhesive picking up the mirror image of the rough, paper surface of the liner. To correct this defect, manufacturers have made improvements to the smoothness of the release liner. They also have improved the adhesive systems so that after the product is applied the adhesive will flow and become more clear.

Other adhesive issues can contribute to a hazy appearance.  The cleanliness of the adhesive and the consistency of the adhesive coat weight are other factors that weigh on the appearance of the finished product. Coating a perfectly clear adhesive is tricky business. If it was easy, anybody could make a quality overlaminate.  Although we have an easy remedy for making the mottling disappear, problems in the adhesive may be irreparable. For example, entrapped air or impressions made during the lamination,  which can be caused by a damaged roller, are not likely correctable.

Now here are the remedies that I promised. The one first is easy. Do nothing. That’s right, do nothing. Within a few days (possibly longer) after application, the mottled botches should magically disappear. If the vinyl graphic is installed outside in the hot sun, the blotchiness may disappear in a matter of hours.

I told you that this remedy would be easy.  How often do problems correct themselves?  Now try telling that to your customer. Most of them know that if sounds too good to be true, it probably is.  For this reason, expect your explanation to be view with skepticism.

A safer bet is my second remedy, which will require a little extra work, but you won’t have to do any tap dancing in front of your customer. Using your heat gun, apply heat to the mottled surface of the film.  The gloss of the film will reappear with if the mottling is in the film. Post heating a graphic never hurts, because it also helps the adhesive soften and wet out onto the substrate, creating a tighter ultimate bond. 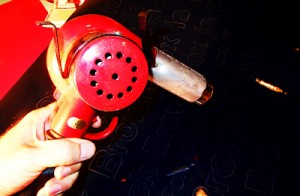 By applying heat to the mottled surface of the film, the gloss of the film will reappear.

Does heating work 100% of the time. No, but whatever does. Some extreme problems cannot be fixed.  In these cases, or when the problem is in the adhesive coating, contact your RTape distributor so they can enter a return of material authorization.  After receiving the material in question, we will test and evaluate it.  Your feedback on our products is very important to us.  If there is a problem with our product, we need to know about it.  We can’t fix it, if we don’t know it’s broke.