Shortcuts can lead to problems. About 25 years ago I inspected a graphics failure on a corrugated trailer. The vinyl had lifted from the valleys of the corrugations and was cracking and peeling from the trailer surface. The installer had taken one of those shortcuts. He had tacked the graphic into position at the corners, allowing the film to bridge all corrugations. After heating the vinyl with his torch, the installer used a rivet brush to force the film into the valleys. Here’s the problem — vinyl will only stretch so far. Overstretching puts too much mechanical stress on the film. Sooner or later, the vinyl will lift or tent in corrugation valleys. To avoid these problems you should apply vinyl graphics in a relaxed state using the method described below.

Begin the application on the top of the crown of the corrugation, in the center of the panel. As you install the graphic from your starting point downward, the application sequence is (1) crown; (2) lower slope; (3) lower valley; (4) flat space; (5) upper valley; and upper slope.   Always start each squeegee stroke in the center of the panel, applying pressure from the center to the outer edge.  A natural tendency is to apply strokes in one direction rather than using alternating strokes. This can cause misalignment  problems, especially when one graphics panel must match another. By applying strokes in one direction, you will most likely push the emblem in that direction, distorting the graphics panel. 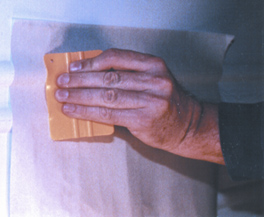 2.  Use the corner of the squeegee to apply the vinyl to the lower slope of the corrugation.  Some manufacturers recommend first applying the vinyl with your thumb (gloved hand) prior to using a squeegee. See photo 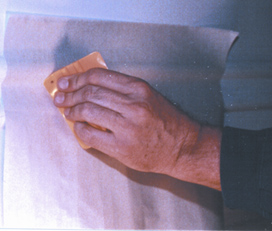 3. Run the edge of the squeegee in the lower corrugation valley. See Photo C. 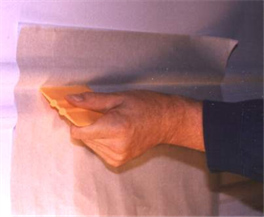 4. Starting in the center in the lower valley, use overlapping downward strokes to squeegee the film to the flat area between
the valleys. See Photo D. 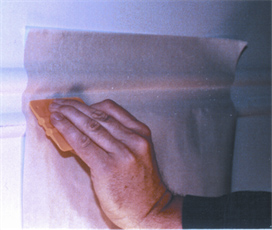 5. Use the edge of the squeegee to apply the vinyl to the upper valley. See Photo E. 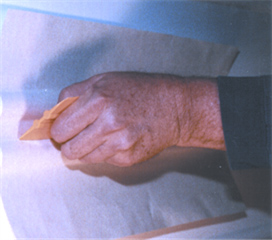 6. Use the corner of the squeegee to apply the film to the upper slope. See Photo F. 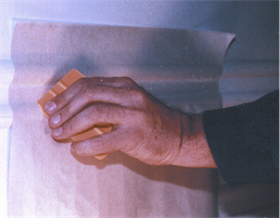 7. Before removing the application tape, cut the vinyl at the seams, using a utility knife. Vinyl, which is not cut, will inevitably tear as the trailer panels vibrate and flex with the movement of the trailer. Rather than tearing in a nice straight line, the vinyl rips, leaving ragged, unsightly edges.

8. After cutting the seams, remove the application tape by pulling it 180° against itself. See Photo G. 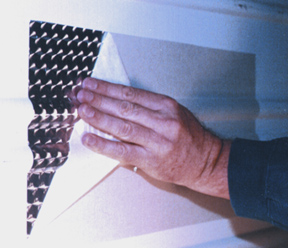 9. Check for air bubbles under the vinyl. Puncture an edge of the bubble with an air release tool or pin and force the air out with your thumb.  Never puncture the vinyl with a knife. A knife creates a slash, which will eventually open up. Finish your application by heating the vinyl film with a heat gun or propane torch.

10. Using an industrial heat gun or propane torch, heat the film and  run the edge of a squeegee in the corrugation valleys.  To prevent the squeegee from scratching or marring the vinyl surface, use a low friction sleeve. See Photo H. 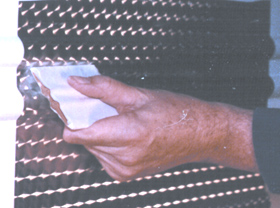 11. Puncture the film in several places around the rivet heads with an air release tool or pin.  After heating the vinyl, use a rivet brush to burnish the vinyl around the rivet heads, using a circular motion. Regardless of the application technique or whether you use a rivet brush, felt squeegee or plastic squeegee, successful  graphics applications to rivets and corrugations require good mechanical pressure and the use of heat.  Heat is important in these applications, because it softens the vinyl, so it can conform to the irregular shapes of the corrugations and rivet heads.  Heat also breaks the memory of cast vinyl films, which prevents tenting around rivet heads and channeling in the corrugation valleys. Heat also softens the adhesive, which makes it flow, so it adheres faster and creates a long-lasting bond. See Photo I. 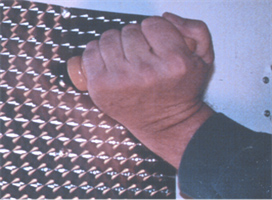 12. Resqueegee all of the edges of the graphic.

13. Inspect your job and make sure that the vinyl conforms tightly to the rivets and corrugations.

For more information about graphics application, I highly recommend reading The Graphic Installers Handbook. This comprehensive guide to vinyl graphics installation is a “must have” resource for the beginner or seasoned professional. Written by Rob Ivers, the certification director for the PDAA (Professional Decal Application Alliance), the handbook covers every aspect of vinyl graphics installation. Contact Rob at www.robivers.com for more information about his book. Rob also offers PDAA certification classes as well as private graphics training.