Selling vehicle wrapping services is easy when you can offer potential customers a laundry list of proven benefits of this trendy advertising medium.

You’ve invested in top of the line printing equipment and materials. You’ve shelled out big bucks for training. You’ve hired experienced designers and expert installers. Now all you need is some customers. 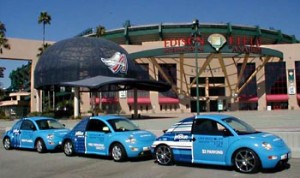 Marketing budgets have been slashed in recent years, but vehicle wrapping practically sells itself to larger companies that are interested in reaching potentially hundreds of thousands of viewers over the short-term. Striking a deal with a big brand name can drive significant revenues for your shop.

But let’s face it. Most of your prospects are probably neighborhood businesses. So, how do you seal the deal with those business owners who are still trying to decide whether or not an investment in vehicle wrapping will pay off for them? After all, we’re not talking about a few dollars for vehicle graphics here. Total vehicle wraps can be a major capital expenditure for smaller companies, like hair salons, restaurants and the like.

Lucky for you, leading auto wrapping shops, industry trade associations and research firms have been collecting case studies and viewer data that make your job as salesman much easier.

Benefits of Outdoor Media
You can start the sales process by explaining to your customer the general benefits of outdoor media. Outdoor media play a vital role in the media mix, according to a study by Arbitron, Inc., an international media and marketing research firm serving outdoor media, radio broadcasters, cable companies, advertisers and advertising agencies in the United States and Europe, because it reaches consumers missed by other media and enhances exposure of other media. Outdoor media reach consumers not exposed or only lightly exposed to newspaper and local television, for example, and are complimentary to radio campaigns.

Outdoor media also reaches the entire socioeconomic spectrum of Americans, according to the study. People with heavy vehicle mileage and long commutes are more difficult to reach with both the newspaper — almost one out of three Americans do not read a daily newspaper anyway — and local TV news broadcasts. On the contrary, the study showed that virtually every American (96 percent) travels in a vehicle each week as either a driver or a passenger.

So by nature, commuters are an exceptional advertising target in terms of both income and consumption habits. Thirty-five percent of heavy commuters come from households earning $75,000+, compared to only 23 percent for the U.S. average income profile. This group is likely to be aged between 25 and 54.

Moreover, the Arbitron study concludes consumers that are reached repeatedly with a message show higher advertiser awareness, brand recall and purchase behavior. Vehicle wrapping, then, offers advertisers an excellent opportunity to reach commuters on the highways and city streets.

“Wrapped vehicles not only place messages in front of target consumers, they also provide the opportunity for direct customer contact through coupon distribution, sampling and other promotional tactics,” notes Stephen Freitas, spokesperson for the Outdoor Advertising Association of America (OAAA).

Vehicles by the Numbers
Beyond communicating the traditional benefits of outdoor advertising, you can also cite numbers that will pique the interest of even your most frugal prospects.

“The cost of advertising over the life of the vehicle is a miniscule amount,” says Peter Bearth, director of Spectrum Media Group in Dallas, a division of J Perez Associates.

How does he know? New non-public transportation campaigns are being measured and the results will help you gauge the number of vehicles your client needs to wrap or the number of hours the vehicle must be driven in order to reach the desired audience levels in their markets. According to the Transportation Advertising Council, a division of the OAAA, vehicle advertising generates between 30,000-70,000 daily vehicular impressions.

“The vehicles are often equipped with Global Positioning Satellite tracking systems, which can provide detailed vehicle tracking information and, in some cases, audited reports necessary for monitoring the effectiveness of an advertising campaign,” says Freitas.

Driving Revenues, a vehicle-advertising firm in Washington, broke those numbers down even further and compared vehicle wrapping head-on against other forms of advertising. Here is what they found a $20,000 investment buys:

Case Studies Prove the Point
Autowraps, Inc., a mobile sampling company in New York City, charges between $2,000 and $4,000 for a vehicle wrap that lasts for three years. In this scenario, the return on the investment could be even greater than the figures listed above. Autowraps owner Daniel Shifrin insists that there is no other form of advertising for which small businesses can opt that comes even close to the cost per impression of vehicle wrapping.

“An advertisement in the yellow pages costs up to $15,000 for one year for a display ad,” says Shifrin. “And your competitors are right there with you and you have to wait for someone to decide to pick up the yellow pages.”

Let’s look at some real-life examples that prove the point. 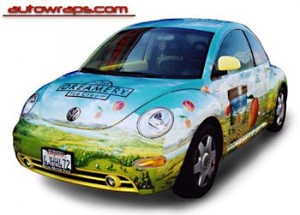 Autowraps initially wrapped 10 VW Bugs for Dreyer’s Ice Cream. The cars featured Dreyer’s Dreamery logo, an American flag and some landscaping. VW owners were selected from Autowraps’ database based on their demographic driving patterns and personal demographics. Owner/drivers were paid a monthly fee for two months to drive their wrapped vehicles around pre-determined routes. The selected routes were based on traffic and population flows during peak hours and weekend exposure in specific locations. Each vehicle accumulated at least 500,000 impressions per month.

“From the day we wrapped our first Bug we have been inundated by people who have seen the Bugs and want to wrap their cars,” says David Ritterbush, vice president of marketing for Dreyers Ice Cream.

By the second week of the launch, Dryers had received such an overwhelming response that they added another 11 vehicles to the campaign. The “Sweet Fleet” was also driven through grocery store and convenience store parking lots where the drivers would get out of their vehicles and hand out coupons. Other successful events included drivers going to baseball games and other venues where the Sweet Fleet cars would be seen by thousands of people at one time. 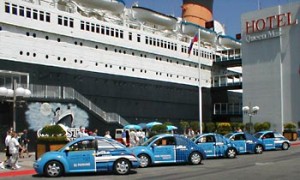 JetBlue Airways contracted Autowraps to wrap nine VW Bugs for a four-week program in which drivers drove the cars eight hour a day, six days a week to generate awareness for the airline’s new route from Long Beach to JFK. The cars featured the JetBlue logo and colors with information about the new route and were driven through targeted high traffic areas. The vehicles were driven in groups of two or three to attract even more attention. The result was more than 6.75 million impressions in the month-long period.

While these are examples of large companies, Shifrin says vehicle wrapping is just as effective for smaller businesses that wrap one vehicle and drive it along normal routes as they do every day business. “We are wrapping cars for real estate agents and bars and restaurants and sun tanning places ­ every kind of business you can imagine,” he says. “It’s cost-effective and it works well.”

Indeed, as Shifrin notes, wrapped vehicles are one of the only mediums that people make an effort to view. Could vehicle advertisers like Nike, Reebok, Proctor & Gamble, Lycos Sports, Kraft Foods and Coca-Cola be wrong?