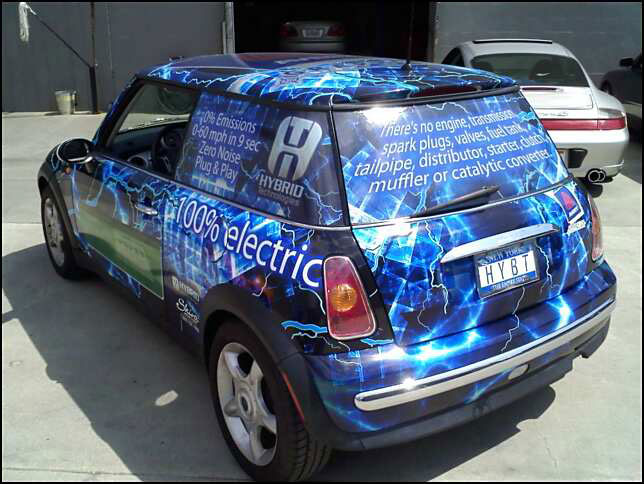 Wrapping a miniature car may not be as hard a wrapping a semi, but it has its own unique challenges. Find out how SkinzWraps approaches Mini Coopers.

Mini Coopers already demand attention on a roadway dominated by SUVs. But when you wrap one of these miniature cars, they not only demand for attention – they scream for it.

SkinzWraps, a Dallas-based vehicle wrapping company, did just that. Hybrid Technologies hired SkinzWraps to design and install the wrap of an electric Mini Cooper. The all lithium model LiV FLASH was launched last summer and was part of the festivities for last year’s Emmy Awards.

“This wrap was pretty much seamless. Most of the work we do is as seamless as possible but for show cars it’s a must,” says Peter Salaverry, Chairman and CEO of SkinzWraps. “This vehicle was unique because it’s all electric. So the challenge was to create a wrap that would demonstrate how cool this car is.”

Salaverry’s goal was to create a design that shows what makes the car unique – fuel efficiency. The car had to speak “electric power.” Salaverry accomplished that with lightning bolts that portray electricity. The colors are electric blue and black.

“We wanted to incorporate the concepts of solar power and the grid, which are going to become part of the terminology for cars,” Salaverry says. “The rear panel has the words ‘100% electric’ and tells you there’s zero noise, that it goes from zero to 60 in nine seconds and has zero emissions.”

Avery claims Easy Apply RS is the fastest applying film in the industry, 15 percent faster to apply than the leading competitor. Easy Apply RS has a glossy, paint-like appearance that is optimized for digital printing and is supported by an extensive online ICC Color Profile library so images really pop. Avery guarantees removability of Easy Apply RS for the life of the graphic up to five years.

“We are an Avery house,” Salaverry says. “With Epson printers and Avery film, our designs pop in high definition. Avery’s specialty films and overlays give our wraps that extra kick and – voila – here comes this Mini Cooper getting insane reviews.”

Here’s how it works: Installers can drape the vinyl over the vehicle and position it. If it’s not exactly where the installer wants it, they can slide it to where they want it to be and reposition. Air bubbles and wrinkles aren’t a problem, Avery says, because of the Easy Apply RS air egress channels.

Even though SkinzWraps has been wrapping vehicles since 2001, the company takes on every job as if it was the first of its kind. The company works by what it calls the True Sync model. The designers and installers work together to make sure both sides understand any peculiarities of the job at hand.

“We don’t use templates. We make our own hand measurements,” Salaverry says. “Then the designers cut the vinyl to match the needs of the installer. That way, we don’t run into problems with things not fitting. I won’t say it never happens, but it rarely happens with our process.” 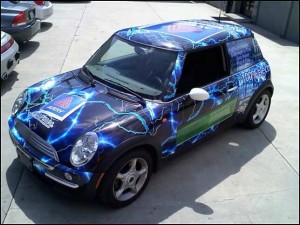 Tackling the Hood
“This was a live wrap, and I have to admit I was not real thrilled when I saw the hood of that vehicle knowing,” says Molly Waters, a strategic sales support manager at Avery Dennison. “The two of us who tackled this job aren’t regular installers, but it was much easier than we thought when we started working on it.”

Still, Waters says the hood was the most complicated part of the electric Mini-Cooper wrap. That’s because of the contours and fenders on the front and the nose that slopes downward. Waters’ strategy: breaking the wrap into parts.

Bumpy Bumpers
Waters relied plenty on her squeegee and heat. There are two options: heat guns and troches.  Many using the torch, she says, because the extension cord you need to use with a heat gun doesn’t get in your way. What’s more, she says, the brass on the torch doesn’t hold heat the way the end of a heat gun does. So if you accidentally grab it by the end, you don’t get burned.

“If you set that heat gun down and don’t think about it and you are on carpet at a tradeshow, you could burn a hole in the carpet,” Waters says. “So, the heat gun is actually more dangerous than the torch.”

The entire Mini Cooper wrap took about six hours. From Salaverry’s  view, the bumpers were the most challenging aspect of the job. Bumpers are typically a challenging area for any installer, he says, so you have to slow down a little bit.

“The expectation was high because when you walk in with a Ferrari, it’s easy to wow somebody because it’s a Ferrari,” Salaverry says. “This is Mini Cooper. Not very many people get wowed with Mini-Cooper. So we had to wow them with the design and the uniqueness of that car – and we did that.”