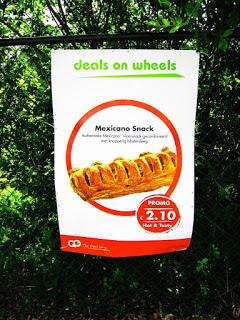 Chicago is known as the “Windy City”. It received its nickname as a reference to one of its long-winded political figures not to its notoriously bad windy weather. Maximum wind gusts in Chicagoland can reach 80 to 90 miles per hour. (Winds in many other cities, especially along the Eastern Seaboard, exceed Chicago’s levels.)

Working as a construction manager for a family construction company, one of these Chicago wind gusts blew down the walls of one of my projects, a large commercial building, even though the walls were braced.

Although seven other buildings in the area that were under construction were also blown down from the force of these high winds, the lesson about wind loads was none the less painful and one that I remembered. It was a lesson that applies not only to walls but also to sign faces and banners stretched across streets.

These tremendous wind loads not only can tear apart banner material, but can also bend poles  used to suspend banners. The chart below will give you some idea of the amount of force that banners are subjected to.

To wind-proof  banners you have a few options. Some sign people, believe that any banner, larger than thirty square feet, needs wind slits. Wind slits, also called wind pockets, are semi-circular or crescent-shaped cuts in the banner substrate. These slits vary in size from three to five inches in diameter, spaced about eighteen to twenty-four inches apart.  The wind slits allow some of the air to blow through the banner, which alleviates some of the wind load.  To prevent tearing of the banner material, you can stitch the ends of the slits.

Not everybody agrees that wind slits are a good practice. Many manufacturers will not warranty their vinyl banner materials, if wind pockets are cut in their substrates, because the slits weaken the banner. According to Butch “SuperFrog”Anton of SuperFrog Signs and Graphics in Moorhead, MN, “wind slits are a joke. They detract from the appearance of the banner, they weaken the banner material, and they don’t do much good in relieving the wind pressure. At best, wind slits only reduce wind load by 10 to 15%.” Anton recommends that if you want a  more wind-resistant banner, use a heavier weight banner material and improve the way you are installing banners.

If you use a rope to install a banner, interweave the rope from one grommet to another, either along the top or the bottom of the banner. This method distributes the wind load over a greater area, than when you just tie the banner at the corners. Tension on the ropes holding the banner in place should be taut, so the banner doesn’t flap in the wind. Flapping banners often rip.

An even better method to install banners is use bungee cords, which stretch under wind load, and can prevent the banner from tearing.  Ropes are too rigid and less forgiving that bungee cords. The bungee cords will allow the banner to bounce in the wind. Compared to ropes, bungee cords won’t loosen up and slacken, so they won’t require retensioning.

If you are installing a banner against the wall of a building, pull the banner tight so the wind can’t get behind it.  Using screws with washers, fasten the banner to the wall through every one of the grommets.   Grommets should be spaced twenty-four inches apart.  Before drilling any holes in an underlying wall or building surface, make sure that you have the approval of the building owner. Before hanging any banner across a street, call the city hall to see what regulations and restrictions apply.

Banners that stretch across a street can be attached from their grommets to steel cables above and below the banner. The cables can be mounted to either buildings or poles. Ropes tied to the corners can be used to pull the banner taut, preventing flapping in the breeze.

When installing a banner over a street, you should use a heavyweight banner material, such as 19 oz. or 22 oz. material.  Using two  ¼” aircraft cables secured to two poles, on opposite sides of the street is also recommended. If the metal cables are secured to a wall, some sign makers use a backplate on the interior face of the wall, which disperses the load over a much larger surface area.

By using turnbuckles, you can tension the cables. Banners should be secured to the cables using snap hooks put through grommets spaced every 12” on the top and bottom of the banner.  By using additional grommets, the considerable wind load is dispersed among the points of attachment. As an alternative to using grommets, some sign makers believe that a stronger way to fabricate a banner is to sew steel D-rings into the corners.

The four corners of the banners should be reinforced and secured tightly to the poles using ratchet straps.  For over-the-street installations some also recommend cutting wind slits in the banner material to reduce the wind load.  Without wind slits, the banner would be similar to a boat sail. The wind caught in the banner would put tremendous pressure on the poles.  Because the wind load on over the street banner can be considerable, their size should be limited to 90 square feet or less.