Jim Hingst explains how extreme heat can cause the PVC resin of a vinyl film to break down.

In selecting a film for an application, the “Service Temperature Range” is an important consideration. So what exactly is the service temperature range? As you might guess, this term refers to the range of temperature within which an applied graphic can function without failing after being exposed to that temperature for a period of 24 hours. 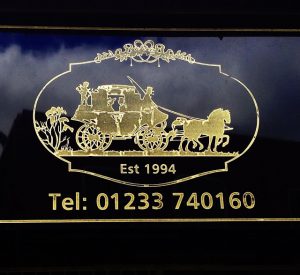 Extreme heat caused this unique two-toned effect, which was unintended and certainly undesired.

For signage applications, the more important number is usually the higher value. When graphics are exposed to temperatures that exceed the specified value for a long period of time, the facestock can start to degrade. In the case of metalized films, such as VinylEfx®, the metallization layer is often the first component to suffer the detrimental effects of heat exposure.

Here’s why. Prolonged exposure to heat will eventually degrade or depolymerize any vinyl. In fact, when the PVC molecule breaks down, the vinyl chloride combines with hydrogen to form hydrochloric acid. When this happens to a metalized film, the acid attacks the aluminum layer and corrodes it. That’s what you are seeing when a metalized film blackens. 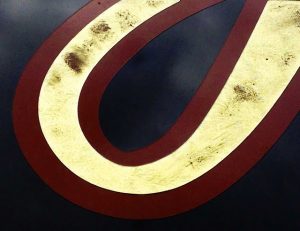 Prolonged exposure to heat will cause the PVC molecule to break down. When this happens vinyl chloride combines with hydrogen to form hydrochloric acid, which corrodes the metallization layer.

Several years ago, Darryl Liedel, RTape’s Technology Manager, and I recorded temperatures on different colored vehicles in New Jersey, when the outdoor temperature was a mere 90⁰ F (32⁰ C). The highest temperature that we measured on white vehicles was 110⁰ F (43⁰ C). On the other end of the spectrum, the highest temperature recorded on a black car, with the sun roof open, was  a blistering 165⁰ F (or 74⁰C).

Is it any wonder that the life expectancy of graphics in desert climates is significantly shortened? With the windows closed on an Arizonan summer day, the inside of a vehicle becomes an oven with the heat building to temperatures of 200⁰ F (or 93⁰ C).

Graphics applied to the windows of a vehicle are also subjected to high heat and thermal degradation problems. On a 90⁰ F  summer day, the temperature of glass can become as high as 136⁰ F (58⁰ C).

High temperatures on black substrates and on glass frequently result in discoloration of vinyl films. Extreme heat can also cause the PVC resin to break down. Because heat prematurely ages pressure sensitive materials, many film manufacturers have significantly reduced their warranties for graphics installed in the southern states of the U.S. and in the Mediterranean and Middle Eastern countries to mitigate their exposure to service claims.    Before you use any vinyl film for an application, consider the conditions to which the film will be subjected and study the film manufacturer’s technical data sheets.