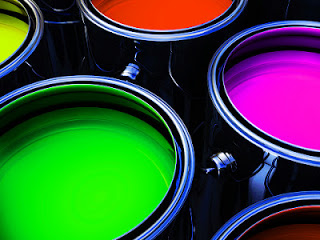 Paints are comprised of two basic components: a binder (or resin) and a colorant (either a dye or pigment). Paint can also include a solvent, which alters its viscosity. The combination of the binder or resin with a solvent is sometimes referred to as the vehicle.  In addition, paints can also include a variety of additives, which modify its chemical and performance properties. In selecting paints and pigments, several properties should be considered, which are listed below:

Lightfastness. The lightfastness of a paint or pigment describes how well it withstands degradation from UV light. Artist paints in tubes are rated on a scale. In the United States, that scale ranges from one to five, with I being the most lightfast. The Brits use a different scale from one to eight, with eight being the most lightfast. What did you expect from the British? They still drive on the wrong side of the road.

Heat stability. In outdoor applications, the durability of a pigment is not solely dependent upon its fade resistance in sunlight. The durability of the color is also affected to a large extent on how it withstands elevated temperatures.

Toxicity. Many of the traditional pigments were highly toxic. While most of these pigments have been replaced by safer and less expensive synthetic pigments, some of the original pigments are still available for conservators and the purists. One of the best sources for natural and historical pigments and paints is the company, Natural Pigments (https://www.naturalpigments.com/).

Opacity or Hiding Power. Hiding power or opacity of a paint or pigment is its ability to hide the surface that you are painting. Selection of a pigment can be based on either its hiding power or its translucency.

Color Temperature. Different pigments of the same hue can exhibit varying color temperatures. This is one reason there are many different choices for the same color.  Cooler variations of a colors tend to the cooler color spectrum of blue and greens. Warmer colors range exhibit a warmer cast from yellows to reds. Even the differences among blacks and whites are not black and white.  For example, Ivory Black utilizes a carbon black pigment, which is a much cooler color than Mars Black, which is comprised of an iron oxide pigment. Flake white, which has a yellowish cast, is much warmer than the brighter titanium white or the cooler bluish zinc white.

Tinting Strength. Tinting strength describes the ability of a pigment to change the hue of another color. In part, tinting strength results from the concentration of the pigment in its vehicle. What also affects tinting strength are the actual physical properties of the pigment, such as its transparency as well as how a pigment absorbs certain light wavelengths and reflects others. Particle size and dispersion also play a role. The bottom line is that two different pigments for the same color may exhibit dramatically different properties. You can visually compare the tinting strength of two paints by mixing equal amounts of the color with equal amounts of titanium white. This may not be very scientific compared to using lab instrumentation, but it should do for the painter in the field.

Chemical Resistance.  The color of a pigment not only can fade, but its hue can also change. Exposure to acids and alkali, heat and air pollutants can actually darken some pigments. Some pigments darken as a result of oxidation or a reaction to other elements in the atmosphere. When I was working for a vinyl film manufacturer, I investigated a product failure in which a bright red film darkened to a burgundy hue. Any number of factors could have affected this color change, including heat and oxidation.