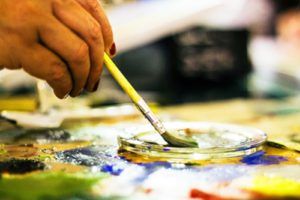 As a paint additive, mediums serve several different functions in oil painting. Adding a medium to paint can extend its volume as well as extending its drying time.

By changing the viscosity of paint, a medium also changes how the paint flows out onto the substrate. (Viscosity is the measure of friction as one layer of fluid moves over another. As the viscosity increases, the paint becomes thicker.)

Mediums are also used in creating glazes, which add transparent layers of color to a painting as well as imparting a luminescent quality to the paint.
Three key ingredients comprise most mediums for oil painting: oil, varnish and a solvent. Mediums differ depending on the type of ingredients selected and the proportions used. For example, while linseed stand oil is traditionally used in these mixtures, other oils, such as poppy oil, are used in mediums.

The traditional solvent for thinning oil paint and making mediums is turpentine. The pungent odor bothers many artists. Personally, I love the smell. It smells of painting. As an alternative solvent to turpentine, many painters have chosen mineral spirits. It does not have the offensive odor that turpentine does as well as being a safer solvent to use. The disadvantage of mineral spirits is that it will not dissolve Damar varnish, whereas turpentine, which is more volatile, will.

Recipes can also include various additives. One basic formula is to combine equal parts of linseed stand oil, turpentine and Damar varnish. NOTE My story on the Fat Over Lean Rule provides recipes for fat and lean mediums.

You can also combine 50% linseed stand oil with 50% turpentine as a medium. (NOTE: When mixed half and half with turpentine, the old sign painting would use a boiled linseed oil/turpentine mixture to preserve wooden ladders, scaffolding and tool handles.) As alternatives to homemade mediums, you can, of course, use commercial products, such as Winsor & Newton Liquin.

Unless you are experienced in making mediums, it is a safe practice to use relatively equal amounts of solvent and oil. The reason is that if you use too much solvent, the oil, which is the binder of paint, will start to break down. On the other hand, you don’t want to use too much oil. Excess oil can lead to wrinkling paint.

The proportions of oil and solvent can vary somewhat. As the amount of solvent to oil increases, the paint is said to be leaner. Conversely, as the amount of oil increases in the formulation, the paint becomes fatter. The rule of thumb in oil painting is that you paint “fat over lean”. What that means is that you want to paint leaner, low viscosity mixtures first. On top of those, you should paint the fatter, higher viscosity layers. The reason is that the leaner initial layers will dry first. If you paint a lean mixture on top of a fat one, the top layer will dry first. As the fatter layer underneath it dries, it will contract and the top layer of paint will crack.