Years ago professional decal installers were taught to install vinyl graphics in a relaxed state without stretching the film. While vinyl films today are much more robust and can withstand the stresses encountered when wrapping a vehicle, you are much less likely to experience film failure, if you adhere to some of the old rules. Here’s why.

When graphics are stretched or forced into indentations on the substrate, films are often stretched beyond their limit. Vinyl films typically have memory. In the same way that a rubber band behaves, films that are forced into concave shapes tend to stretch back to their original shape.

To aid in stretching a film and breaking its memory, installers will heat it with an industrial heat gun or propane torch. Heating the film is, or at least should be, a two-part process. Step one is to heat the film to make it more pliable before you stretch it. Step two requires you to post heat the applied graphic to secure it in place.

Vinyl films, however, can only take so much. When you stretch a film too far, problems result.  Just consider what happens to a film that is stretched 200%. A two mil vinyl is not longer two mils anymore. Now it’s one mil.  What’s more, the one mil of adhesive is no longer one mil. Now it’s only a half of a mil. Films can break apart and the adhesive doesn’t have the strength to hold the film in place.  The photograph below illustrates my point. 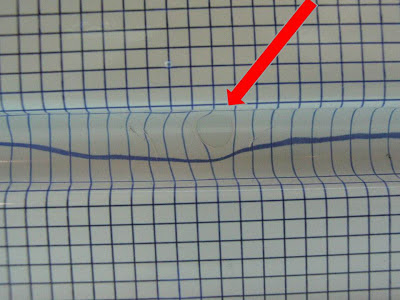