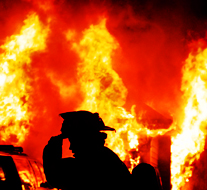 For interior applications, a FR grade of banner substrate is often required to comply with state and local fire codes. I was taught that FR is an Underwriter’s Laboratories (UL) classification, which stands for flame retardant. However, I have heard many people say that the FR is an acronym for “Fire Resistant” and “Flame Resistant”.

Since banner materials are often used for interior applications, such as graphics for shopping malls, air ports, museums, trade shows and theater performances, the flammability of these substrates is always a key consideration in material selection.  Some banner materials are, by the nature of their construction, fire resistant.  Vinyl banners, for example, tend to burn less than a polyethylene substrate.

For those banners materials that are not very fire resistant, manufacturers have developed many different types of fire-retardant coatings for fabrics. Many of these coatings contain either bromide or antimony trioxide, which are effective flame retardant agents.

Although there is no certification that pertains directly to hanging promotional materials, many manufacturers use the California State Fire Marshall Code as their benchmark for testing the flammability of their materials. The demanding California fire code requires tests to be conducted, according to the National Fire Protection Association (NFPA) standard described in NFPA701, which are a widely accepted industry test methods for the flame resistance of textiles and films used in public places. (NFPA is a worldwide nonprofit organization, which has developed codes and standards for fire safety.)

The NFPA701 testing is performed in a special flame cabinet.  In these tests the banner substrate is folded (like a drapery) and held over a burner.    The person conducting the tests exposes the material to a burning flame for a prescribed period of time, and then records how long the material burns, as well as how much time passes before any burning material is extinguished and drips to the floor of the cabinet.  The California State Fire Marshall Code also requires leech testing, which is a method for identifying flammable substances within a fabric or banner material.
Banner substrates are also evaluated according to many different international standards, which you may encounter as you research materials.  For example, B1 and M2 are European classifications. In Germany, the flame resistance of fabrics used in public spaces must pass the fire testing procedures in the DIN 4102-1 standard. The B1 designation refers to a class of building materials, which must not be easily flammable. Other countries, such as France, Luxembourg and Belgium, materials must qualify according to more stringent standards.

The flame retardant characteristics of a textile and the ink used to print it are  important considerations for fabric banners used in public places.  Laura Maybaum, POP Market Segment Manager for Nazdar (Shawnee, KS), says “for interior applications, we developed a flame retardant ink that will provide the best opportunity for passing certification testing when printed on a fire retardant substrate.  Testing the burn characteristics of an ink is a complex process because how that ink performs varies depending on the substrate.  On one banner substrate, a heavy concentration of ink can help retard burning.  On another banner, the same amount of ink may burn differently.”