The reason that I make this distinction is that there is a big difference between polyurethane and vinyl films.  What’s more, a 100% polyurethane film is also quite different than a polyurethane-based blended film. Let me explain the differences.

Polyurethane films are very soft and stretchable. There’s a reason for this. Polyurethane is comprised of very long molecular chains, which provide it with elasticity.  By comparison, vinyl is composed of molecules which are very rigid. 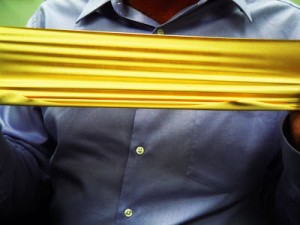 As plasticizers leach out of a vinyl, the film increasingly becomes more rigid and brittle. Eventually, appliques manufactured from vinyl heat transfer films will crack.

Polyurethane films do not need plasticizers to make them stretchable. These films are naturally elastic. That’s why appliques made from polyurethane heat transfer films retain their flexibility and provide long-term service life. In fact, if garments are washed and dried properly, polyurethane appliques should last as long as the garment itself.

With the addition of vinyl to their formulations, polyurethane-based films are also typically stiffer, less elastic and not so durable as 100% polyurethane.