The plethora of terms used for the application tapes sold in the sign and screen print markets could confuse anyone. In the sign market, many people just use the terms “application tape” or “application paper”.  Frequently this tape is also incorrectly referred to as “transfer tape”.

If you are a purist and want to pick a few nits, the terms application tape and transfer tape refer to completely different products.  Transfer tape refers to a transfer adhesive, which is an adhesive coated onto a release liner.

Are you confused yet? If not, let me proceed. Screen printers use the terms “premask” or “prespacing tape” for the application tapes that they use. While these terms are often used interchangeably, the meaning assigned for each one is different. For those of you, who yearn for the precise definitions, I have provided the following explanations for these terms:

Application Tape. A pressure-sensitive tape used to transfer cut vinyl graphics and printed films from their release liners to the application substrate. Application tapes are made using a paper facestock or a film facestock. Popular brands of application tape include RTape ApliTape™ and Conform Series® tapes. 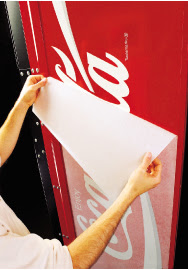 Premask.  In the screen print industry, premask generally refers to a  low to medium tack heavyweight paper masking that covers a  one piece printed vinyl graphic.  This paper “premask” protects the decal during storage, transport and handling.  The stability of the thick premium grade paper also gives the graphic additional body which aided installation of the vinyl film.   An example of a screen print premask is RTape 4760, a heavyweight paper  premask with a medium tack adhesive. 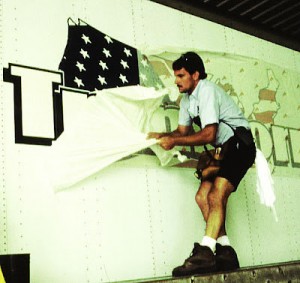 Most fleet graphics printers prefer using a premium grade heavyweight paper premask or prespacing tape for a variety of reasons. Not only do these tapes provide more stability to flimsy films during application, after the installation is complete they remove in one piece, not bits and pieces.

Prespacing Tape.  Used in the screen print industry, prespacing tape refers to a high tack heavy weight paper tape used to mask die cut graphics.  The higher tack tape was needed to transfer the cut vinyl lettering and emblems and to hold everything in place during installation.  Back in the days before computer cut graphics, vinyl films were steel rule die cut and often saw cut. (Believe it or not, sheets of vinyl graphics were at one time pinned to plywood and cut with a saber saw or band saw.  The rough edges were smoothed with a file.)  The cut graphics were then prespaced by hand onto the prespacing tape.  The individual pieces of release liner were then removed from the cut lettering and replaced with a common liner.  Examples of prespacing tapes are RTape 4761RLA and 4775RLA. Both are heavyweight tapes with RLA® Release Liner Adhesion. 4761RLA is designed to adhere to embossed release liners.

Transfer Tape, also called  Transfer Adhesive.  An adhesive which is coated onto a release liner.  Think of it as glue on a roll.  The transfer adhesive or transfer tape is laminated or applied to a surface, such as a screen printed polycarbonate control panel.  When the end user is ready to apply the film, he removes the liner and applies the part (with the transfer adhesive on it) to the application surface.