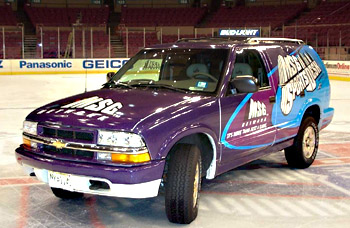 Some sign makers are exploring vehicle wrapping as a lucrative add-on to their current workload while others are launching entire businesses targeting this fast-growth medium. Small businesses, large corporations, media outlets and others that want to attract attention are turning to vehicle advertising as a means to that end.

But be warned: vehicle wrapping is not for the faint of heart. While some of the basic vehicle graphic application skills crossover to wrapping, the latter requires more sophisticated techniques.

So if you are considering venturing into the bustling world of vehicle wrapping, then read on to learn more about what it takes to get the started ­ or if you even should.

To wrap or not to wrap?
There is no doubt that there is lots of money to be made in wrapping vehicles. Vehicle wrapping is fast becoming one of the hottest forms of outdoor advertising.

“The new wave of vehicle graphics is total wrapping because people have realized that the most cost-effective advertising on the planet is vehicles,” says Art Wollenweber, president of Qube Visual, a Denver-based visual services company. “Signs shops are starting to realize that they can go from the $150 decal on the door to something that is a lot more profitable.”

If you don’t begin offering vehicle wrapping services, then there’s a good chance that your competitor will. Experts say a good way to assess the viability of expanding your business is to count the number of requests you get in during a month-long period. If you find that you are turning customers away, then it may be time to begin considering a foray into wrapping.

“If you do it right and the margins are good, then you can turn around and price it and make a good profit,” says Peter Bearth, director of Spectrum Media Group in Dallas, a division of J Perez Associates. “But if you just jump in and you don’t know what you are doing, then you’ll make lots of mistakes. Vinyl can’t be recycled. Once you print it, that’s it.”

Experts say the best bet for sign makers is to make wrapping one element of what the business already offers instead of spinning off a new business based solely on vehicle wrapping. The myth is that only large shops can make money wrapping.

“Many sign shops think they can’t get into vehicle wrapping unless they are a huge operation,” says Wollenweber. “But that’s not really true.”

Getting up and running
There are two options for sign makers to venture into vehicle wrapping. Large shops may already have or decide to shell out the major investment in solvent ink-jet printers; smaller shops may decide to outsource printing, as well as other functions.

The best printing results come from high-end machines from Océ, VuTek, Mutoh and Mimaki. Lower-cost water-based printers are not suitable for doing vehicle wrapping projects because the media and inks used with these printers are not as durable, according to Tim Maher, sales manager for Avery Digital Graphics.

Mid-range solvent ink-jet printers are a good place for small shops to start. Roland’s SOLJET-500, Gerber’s Edge, Summa’s DC2 and Hewlett Packard’s HP-5000 are suitable for producing high-quality vehicle graphics up to about 12 feet wide and much more affordable than the coveted VuTek.

“The price points of those machines are coming down dramatically,” says Maher. “You can get into one for as low as $30,000, which is making true solvent printing much more attractive to the sign industry.”

Sign shops that cannot afford to invest in an industrial printer may choose to outsource to a larger company that has the equipment. Many large shops offer wholesale rates on printing.

Experts also recommend investing in an auto library that contains vector images of cars, trucks and buses, a digital camera and installation tools like squeegees, razor blade knives, air release tools and propane torches or heat guns. And, of course, you’ll need to have the computer equipment and software to design the graphics.

Managing materials
As vehicle wrapping becomes more and more popular, vendors are coming out of the woodworks with materials designed to make installation as easy as possible. Two-mil vinyl is the most effective for vehicle wrapping, according to experts.

“The MPI 1005 EZ features the Easy Apply technology that cuts down on wrinkling and damage, bubbles and waste during installation,” says Avery spokesperson Tiffany Witham. “We also offer 100 percent clean remove ability on the adhesive if it’s a sound OEM paint surface. This technology cuts down your production time, which saves you money on the job, and helps the installer if they are not truly an expert at installation.”

“Comply is a mechanical feature that allows air to travel through the adhesive, so there are usually fewer air bubbles and the film can be applied with time-saving techniques such as large squeegees,” says 3M spokesperson Peter Cree. “The pressure-activated adhesive allows the film to be repositioned during installation until pressure is applied to the film surface.”

Other competitors are up and coming with vinyl films designed for vehicle wrapping, too. MACTac’s JT5529P is emerging as a popular choice. The product is coated on one side with a permanent, opaque, acrylic pressure sensitive adhesive and supplied with an 86# Kraft liner.

“The materials make all the difference in the world,” says Bearth. “Some of it is very aggressive and it makes it harder to lay down and pull back up to reposition.”

In application, if you use calendared vinyl over a rivet, then it will tent because calendared vinyl tends to shrink a bit. Cast vinyl doesn’t shrink so it allows installers to go over rivets, corrugation and complex curves that run both horizontally and vertically with greater ease and longer-lasting performance.

“You have to work with top of the line products. People try to cut corners using different brands ­ and there are many ­ but then installation becomes so difficult that you can mess it all up,” says Manuel Vicnansky, president of DeSignCo in Miami. “You pay a premium for the high end products, but it cuts 30 percent of the installation time.”

The average going rate for sign shops wrapping vehicles varies depending on the size and type of vehicle. But a good rule of thumb in today’s market is between $10 and $15 per square foot installed plus design fees.

“Don’t quote prices without seeing the vehicle,” says Wollenweber. “Consult with the installer to find out how long it will take.”

It typically takes two installers one full working day to complete a wrap.

Most large companies that want to advertise on their vehicles don’t have to be sold on vehicle wraps. But the high cost compared to traditional vehicle graphics will cause some individual operators and small business owners to cringe.

“You have to be able to sell it because when customers look at the initial costs they think it’s a lot,” says Wollenweber. “They don’t think of it as their best marketing opportunity.”

Qube Visual often works with the vehicle financing company to work the price of a wrap into the lease. So a $1500 wrap job is spread out over a three-year period and costs the owner only a few dollars a month.

Like any business decision, deciding whether or not to expand into vehicle wrapping should be fully investigated. But one thing is certain: lots of sign shops are going to make plenty of money in this niche. You could be one of them.