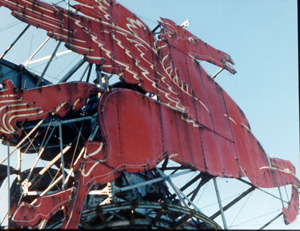 In 1934, the Magnolia Petroleum Company, predecessor to Mobil Oil, erected a large oil derrick on the roof of the city’s first skyscraper, which was billed the tallest building south of Washington D.C. and west of the Mississippi. The derrick supported two 35-by-50-foot red neon signs that formed the image of a Pegasus, a mythological Flying Red Horse that was once the company’s corporate logo and has since become a treasured landmark of the Texan city.

But by 1999 the Pegasus was dilapidated, pitted with rust, and unable to fly. The horses actually stopped revolving 25 years ago in 1974. Mobil moved their headquarters out of downtown and gave both the sign and building to the City of Dallas in 1977. The city eventually bolted down the Pegasus so that the rusted pieces would not fall off. Twenty-years later in 1997 the battered sign had become outdated and was shut off. But that is where this story begins.

Resurrecting a Legend
While the City of Dallas had all but given up on the glowing Pegasus, Denver-based developers had different ideas for the historic icon. Their plan was to purchase and restore the old office building to create a luxury hotel ­ The Magnolia — and bring the flying horses back to their former neon glory for Dallas’ Millennium Celebration in December 1999.

That is when Dallas-based architectural signage firm Casteel & Associates was called in to manage the project. Casteel, owner of the firm, said he declined the assignment when the project architects initially contacted him.

“I really did not want to get involved because of the type of job it was,” he said. “But a friend of mine who is an architect came back a second time and said they were having a hard time getting people who were willing to tackle the job.”

In the end the challenge was too compelling for Casteel to refuse.

“What made me change my mind was pressure,” laughed Casteel. “But in all honesty, there were very few people who had the technical knowledge, the dedication to historical preservation and the tenacity to take a lot of different people from a lot of different disciplines and pull everybody together to make the project come off.”

Project members started talking about the restoration in late 1998. Work actually began in the spring of 1999 and was well underway by that summer. While the project met its goal of completion by December 31, 2000 Casteel continues to oversee work on the rotation system to this day.

Bringing Together Specialists for a Common CauseThe primary challenge for project members was the disassembly of the old horses and assembly of the new ones. But Casteel said that it was not just as simple as that. Experts from a variety of industries joined forces to overcome the obstacles of preserving the landmark.

“The project involved steelwork, coatings, and special paintings to make the old tower last,” said Casteel. “It involved porcelain for the horses. The rotating system and power transmission systems required specialists. We had a couple of different engineers involved, as well as computer programmers.” 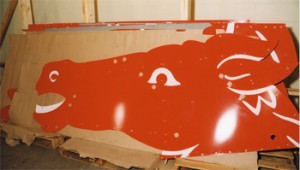 The first thing project members did was to analyze the condition of the old horse, which appears to be one horse but is really two flat, porcelain-covered panels raised by metal scaffolding that is outlined in neon. The two red horses were located 14 feet apart and were originally designed to revolve when placed on the building.

The preservation plans actually called for the sign to be restored but Casteel said that the Pegasus was in such bad shape that the restoration efforts demanded new porcelain-covered aluminum panels and a new motor.

“They were almost 70-years-old,” he said. “The porcelain had been chipped and cracked enough to where rust was a huge factor. We recharged with doing the job in such a way that the new horse would last 75-100 years and so we could not actually leave the old horses up there.”

Helping the Pegasus Revolve Once More
In addition to the relighting, the sign is revolving once again using new technology. The entire rotation system continues to be modernized and updated. Indeed, Casteel said work on the horse is continuing on long after December 31, 2000. For example, project members are still fine-tuning the motor system.

“There are still a few glitches. We’ve had some challenges in the rotation system within the electrical system,” said Casteel. “We fought for a long time and just determined in the last few weeks that part of the problem ­ the big problem ­ was an insufficient ground for the computer controls and thus they were locking up regularly. We’ve made some changes to the control system and the rotation over the last year.”

One modern feature is a technology-based system that will shut off the horse during high winds. said Casteel.

“It has air brakes, which it had before. But we eventually had to replace them because the old ones were not reparable,” he said. “Now any time the wind blows above 20 mph the horse will turn itself off and the brakes will be applied. This was all done via a computer-controlled machine and that is probably the most modern part of it. We have basically a small weather station on the roof of the building that gives us wind speed and wind direction.”

Casteel & Associates has worked on hundreds of custom signs in all shapes and sizes, but Casteel said restoration of the flying Pegasus was the most challenging.

“This was probably the most exciting project I’ve ever worked on, the most frustrating at times, but also the most fulfilling also,” he said. “It was very neat to see the project come together.”