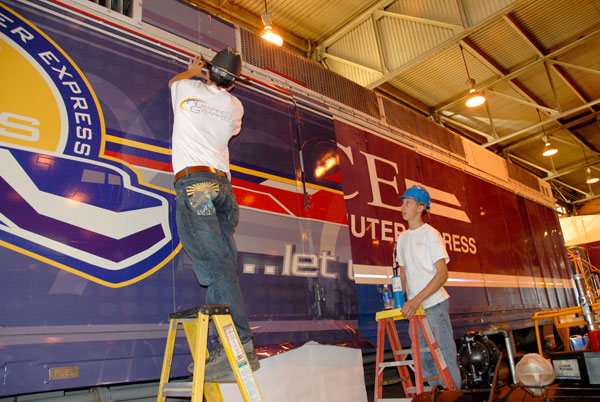 You can’t rely on templates when you work with locomotives. Discover how Wrapped Graphics approached wrapping a train.

A locomotive wrap in California demonstrates the value of prep work.

Wrapped Graphics might not be faster than a locomotive when it installs vinyl, but it has applied vinyl to a fast train.

With this job, planning was the key to success. “The first thing I did was call up our suppliers and manufacturers so we could meet at the site and talk with the San Joaquin Regional Rail Commission about their needs and expectations,” says Larry Lawrence, owner of Wrapped Graphics. “Once we determined those needs, we approached the train wrap like we do 50-foot trailers.”

Getting Ready to Wrap
The real work began with cleaning the locomotive. The rail service had acid washed the train, but Lawrence’s crew had to do a second cleaning to ensure any remaining residue was cleared away to prevent vinyl failure. His team spent about a day and a half cleaning the train with Orange Peel citrus cleaner and alcohol before it was ready to wrap.

“Measuring the train was a bit tricky,” Lawrence admits. “I used a laser to align the panels to make sure it was exact. We ran the beam down the length of the train. With an 82-foot long wrap, being a few inches off could put you off by a foot at the other end. We took a side shot of the train with our digital camera, pulled our measurements, scaled it out and then dropped the image right on top of the template and started building the design that way.”

Wrapped Graphics used nearly 1,500 feet of vinyl to wrap the ACE train engine, which is also 15 feet tall. The graphics for the ACE train wrap were printed with an HP 9000 printer. Lawrence says, “For an application of this magnitude, we chose Avery Graphics MPI 1005 EZ vinyl because we needed a robust vinyl that will endure the train’s daily commuter rides.”

Lawrence says the San Joaquin Regional Rail Commission designed its own creation; however his designers still had to play a role in the finished project. The rail’s designers only offered a design for one side. Lawrence says the biggest challenge for his design team was mirroring the image for the opposite side of the train. Once that was complete, it took Lawrence five days to print the film and another five days to install the vinyl.

Choosing the Right Material
Although Wrapped Graphics chose Avery’s MPI 1005 EZ and DOL 1000 for the installation, Avery also offers the MPI 1005 EZ RS. The RS stands for repositionable and slidable. The initial tack on the film is not as strong as the EZ. With this train wrap, the temperatures were dropping quickly and the installers needed the extra assurance that the film was going to bite down strong. Since the EZ is more aggressive than the RS, they chose the EZ.

“After 24 hours, that adhesion is the same with the EZ and the RS. But during the application, the EZ technology is a little more aggressive,” Waters explains. “Our DOL 1000 protects the ink from fading as well as from abrasion, but it’s also a very high-gloss finish. You get five-year durability with a high-gloss painted look to it with the DOL 1000.”

A Massive Wrap
The sheer size of a train presents a challenge before you ever put down the first piece of vinyl. It’s critical for the installers to make sure the panels are lined up properly all the way down the length of the train. That makes it much more complicated than a semi-trailer or even a bus because of the size and the distance from the train to the ground. The installers can’t put the train where they want it to be because it’s on tracks.

“As far as the actual application, the film is so easy to work with that any experienced installer can work around contours and trims in areas where we would not recommend stretching it in,” says Molly Waters, a strategic sales support manager at Avery Dennison.

“The installers would trim around areas where the vinyl would bump out or go in real deep crevices. It’s just a matter of time. It’s like any good install,” she continues. “When it gets to be complicated, you just slow down and take your time and you can do a good job.”

Lawrence approached the train wrap like a trailer wrap. He started in the middle, and then worked his way out and finally to the front. He used torches instead of heat guns, he says, because the heat gun cords get in the way.

“The biggest difference between a train wrap and a trailer wrap is the compartment center on the locomotive itself,” Lawrence says. “It is a big engine, so there are lots of doors on it, lots of hinges and bolts and rivets. There’s quite a lot going on outside of the train as compared to the flat surface of a truck trailer.”

Train Wraps Become more Common
Waters says train wraps are becoming more common with commuter trains. In the past, she explains, trains often used pigmented films. But now train operators are getting more creative with some digital imagery that changes the look – and she expects more of the same because it offers a larger palate for advertisers.

“Vinyl is a great way to advertise or to decorate trains,” Waters says. “If you decide to change your look, it’s a matter of just peeling it off and installing something new. Vinyl is a much more efficient option than paint. With paint, you have to prep the surface, paint it and then let it dry for a period of time.”